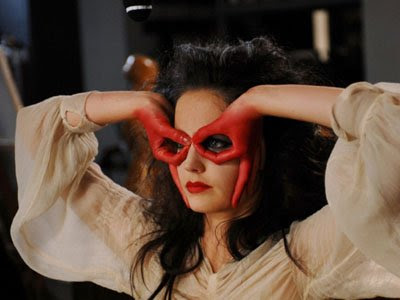 "If you believe in something strongly enough, who's to say if it's real or not?"

It's hard to pinpoint a single theme in a film with 4 separate main storylines set in two different time periods, but I'd judge the above quote from "Franklyn" (which had its North American premiere Saturday at the Toronto After Dark Film Festival) sums it up quite well.

You could even tie it into the film's marketing campaign somewhat...The trailer for the film has a strong "dystopic future" steampunk vibe to it and though that does form the environment for one of the storylines, it's a disservice to the film to market it that way. Perhaps the studio folks wanted so much to have a steampunk film to call their own that they blocked out the reality of what they actually had?

Regardless, the film presents the 4 stories in alternating fashion - usually one or two of the current day London set stories are mixed in between the dark futuristic one. That latter arc occurs in a place called Meanwhile City and follows a masked man who proclaims at the outset that his mission for that night is to kill a man he refers to as The Individual. The intended victim is the leader of a particularly nasty religion that has kidnapped and murdered a young girl. Religion is everywhere in Meanwhile City and since it is illegal not to have one, this creates an environment that allows hundreds and thousands of small religious sects to spring up (including one named the "Seventh Day Manicurists" - there's not a lot of humour in the movie, but that was a nicely placed dose of it). Our masked man is the only person in Meanwhile City who does not have a religion and so he is deemed dangerous by the government. 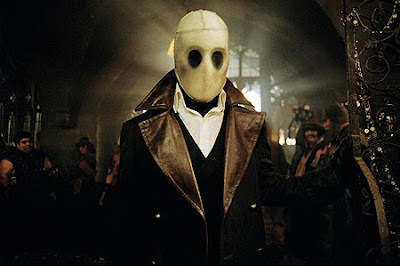 His story becomes more mysterious as the film moves along. Particularly when it is intercut with the plots of the other 3 characters. It's presented as a puzzle and will absolutely leave you scratching your head at times, but - and this is key in these intertwining story arc films - there's so much care given to everything (words spoken, camera angles, colour, etc.) that you have complete confidence that the director will tie everything together or, at the very least, let his theme come through. There were definitely some confused looks and comments after the screening, but it worked for me. It worked very well. There's minor quibbles here and there likely, but the film kept me engaged and curious by dropping clues along the way and foreshadowing little bits here and there. I never found that there was a grand "Oh my God!" reveal, but several smaller ones along the way. Some I "figured out" and others I didn't see until they were shown.

Each of the 4 characters are wrestling with their own issues in determining reality from fantasy (via their art, their memories, imposing their desires on others, etc.). The trailer does get this part right - each is struggling to make a connection to someone or something and retreat to their own worlds when it doesn't happen. The religion angle is tackled a bit further by having one of the 3 London characters be a deeply religious man searching for his son (a fine performance y Bernard Hill). The other 2 are atheists (Eva Green and Sam Riley), but are searching for their own reasons to fully embrace the real world. It's best not to detail too much about each character's arc as it's the kind of film that works when you don't have any preconceptions. Hence my issue with the marketing - this isn't a sci-fi thriller, this is a damn fine look at why many of us "check out" and it's framed as a puzzle for the viewer in order to better get across the feeling of being disconnected.

The film is director Gerald McMorrow's first feature film, so it's certainly reaching with great ambition. I'd love to see a wider release since McMorrow really has a terrific eye for composition and with cinematographer Ben Davis has created a really beautiful looking film. 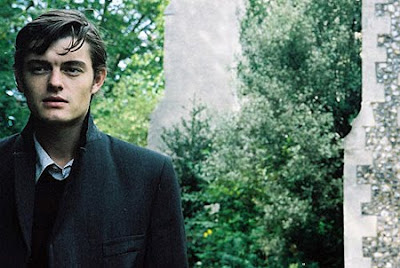