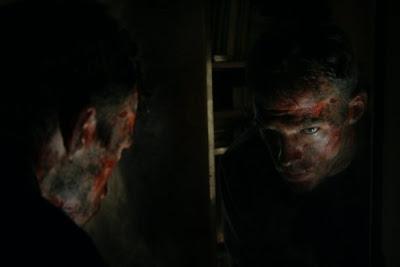 Strigoi, in old Romanian legends and mythology, are the dead who rise from their graves at night. It's also the name of one of the most interesting and unique tellings on film of the vampire legend that I've seen - certainly one of the best currently out there. The film had its World premiere Monday night at the Toronto After Dark Film Festival and charmed the crowd via its humour and slowly revealing story. The staff of After Dark have been calling it a "gem" and I couldn't agree more.

The story centers around Vlad who is a young and slightly squeamish medical student returning to his small village after being away in Italy for some time. When he stops by the local shop, he finds several of the villagers sitting around the dead body of one of the town's old drunks. As they laugh and drink, they claim to be celebrating his life and are just there to mind the body. The local priest has stated it was an accident and therefore they feel there is no need for an official autopsy before the burial. Vlad's not so sure. After all, those bruises on his neck don't look like they were accidents - no matter how much the villagers say that it must've happened while they moved him after he was dead. "You dragged him by the neck?" Vlad asks.

It starts an investigation by Vlad into not just the specifics of the death, but of some of the local legends. As he winds through land ownership rights, police investigations, wealthy communists and his own health issues (large boils forming on his skin), he starts to better understand not only the customs of his homeland but the history of his own family. He also learns more about the strigoi and how there are two types: those who become strigoi and those born into it. As mentioned, the story reveals itself in measures, but does so very cleverly. There are many little clues and bits of foreshadowing scattered throughout and Vlad has to work out the mystery (along with the audience) while the villagers hinder him whenever possible. As Vlad makes his way through the plot, we're also treated to the look of the film. The trailer doesn't come anywhere near giving it justice - it's downright beautiful. First time feature director Faye Jackson made special note of Director of Photography Kathinka Minthe (also on her first feature film) whenever the creation of all the shadows and colours was discussed. 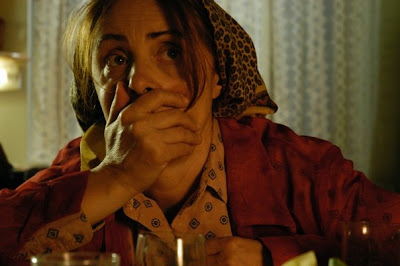 The story also provides lots of room for humour. This is a genuinely funny film that loves its characters and allows them to react to situations. The matronly Mara, for example, has been cooking up a storm for the guests at the funeral, but has had to kick it into overdrive when one of the Strigoi - the wife of the wealthy communist - begins to visit her nightly to feast on her food. If she doesn't keep her fed, the Strigoi will use Mara herself for sustenance. Vlad's grandfather also provides many funny scenes as he doesn't hesitate to blame everything on the communists. Even the disappearance of his sole remaining cigarette from a jar seems to be their fault. Underneath all of this is a strong sense of the history of the country and a reverence for its culture. I'd be lying if I said I got all the references and knew much about Romania's past, but the film makes me want to dig into it. Music plays an important role in the film as well. Traditional folk, gypsy music, dance music...Call it what you will, it's like a reservoir of happiness for the townspeople. This is especially evident in the spontaneous dancing of Mara.

It's yet another tie back to the importance of the Romanian culture to its people and how it keeps them pushing through all their tribulations. That joy is contagious and I'm so happy the filmmakers decided to share it with us. 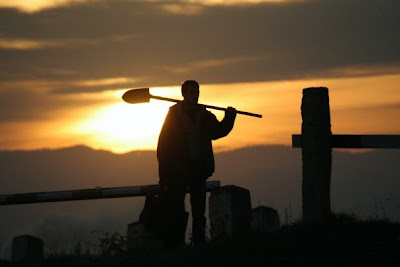