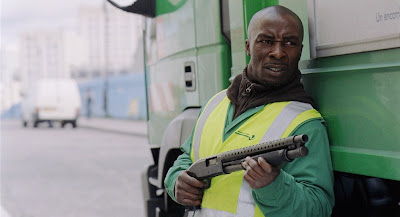 Similar to "Rough Cut", Pierre Laffargue's "Black" is not your typical action movie. Oh, it's got action alright - shootouts, car chases, one-on-one fights, one-on-many fights, etc. - it's just that it zigs and zags when you think the plot is about to go in the expected straight line direction. It starts with Black (played by MC Jean Gab'1) being involved in an armed robbery in Paris, snakes its way to Dakar, meets up with a crazy Russian general, flirts with magical powers, crashes head long into an arms dealer, deals with diamond smuggling bankers and dances around a rather stunning, yet tough, Interpol agent. And wrestlers with machetes - how could I forget them?

All this bouncing around from one strand to another and back again is laid on a foundation of Afrobeat music (supervised by Fela Kuti's drummer Tony Allen) that matches the skittering nature of the plot and is just as much fun. If there's one soundtrack I'm buying in the not too distant future, it's going to be the one for this film. The music matches the shift of locations to Black's native country of Senegal - after a failed armored truck hold-up, Black decides to go there when he receives a call from a cousin. His relative claims that there is a can't miss opportunity of uncut diamonds just sitting in one of Dakar's biggest, yet extremely unsecure, banks. Unfortunately, just as Black arrives, the inept and corrupt bank president is replaced. Things will now be run by Pamela (Carole Karemera), an extremely efficient, no-nonsense, statuesque and cat-like foil to Black's grinning, confident trickster. The winding plot kicks into gear at this point and Laffargue (who also co-wrote the screenplay) lets go of the brakes to take everyone on a memorable ride. 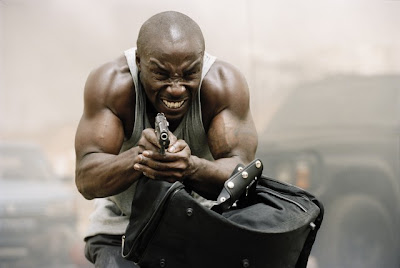 The Toronto After Dark Film Festival crowd loved it and appreciated not only the "where is this going next?" feeling it provided, but also the bits of humour thrown in - mostly via Black himself. MC Jean Gab'1 (how great a name is that?) seems just as confident in the role of Black as Black is of himself. It's a great and very entertaining performance that will hopefully allow him to break out to a bigger scope of roles. He carries a certain amount of glee with him throughout the story and you can't help but be caught up in it. Karemera is also good and intense when she needs to be. The rest of the cast pales a bit in comparison, but it doesn't really affect the film.

One of the more interesting and odd subplots is the rather mystical animal like qualities some of the characters take on - in an early foreshadowing sequence, Black is told by an old shaman that he has the mark of the lion on his face and he is destined to battle the snake. He will, however, require the help of the panther. In a beautiful shot somewhere in the middle of the film, the camera rotates on a certain character and leaves you no doubt as to who that panther is. The look and feel of the whole film is actually quite lovely (particularly in those latter shots when these mystical qualities come out) and is best suited for the large screen. "Black" is actually getting a limited theatrical run, so if you live in Toronto you'll be lucky enough to be able to catch it starting August 28th at the Yonge-Dundas AMC. If you live elsewhere (particularly in Canada), keep an eye out for it. Evokative Films is distributing and they also have "Rough Cut" lined up for early next year. I'm looking forward to seeing both those films again in the theatre. 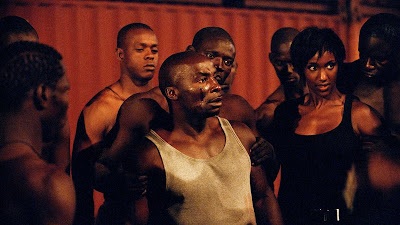