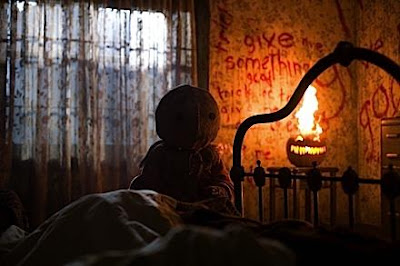 Back to expectations...What happens when you go into a film with very high hopes? Say a film that's an anthology of stories all based on Halloween legends (and you're already a big fan of anthology films - in particular those old Amicus horror ones)? And it just happens to have a 9.2 rating on IMDB and easily sold out its advanced tickets early on? Sure sounds like a good time at the theatre, doesn't it? Now what happens when you realize that the film not only has pre-built-in fans (none of whom have seen it) who not only dress as characters from the movie, but also know all sorts of trivia about them? And then mix in a smarmy director who kicks things off by making fun of other movies? Well the buzz starts to wear off pretty quick. Even worse is when you're about 10 minutes into the movie and you realize you're just not having very much fun...

I'm actually quite glad that the 2009 Toronto After Dark Film Festival snagged "Trick R Treat" for its lineup this year. This is a film that has been kinda lying in distribution purgatory for about a year and a half (or even longer) and managed to generate some pretty big excitement leading up to its Thursday evening Toronto premiere. At the very least, it pulled in fans who may not have attended After Dark and now may consider coming back again next year (you could tell by the crowd response that there were many who had not been at previous screenings during the week). To give it credit, there are some fine moments in the film - some story elements, a couple of performances (Dylan Baker continues to play questionable parental role models), several clever lines of dialog and an effect or two were standouts. The colours and lighting were vibrant and the image looked quite fantastic on the screen. And Sam - the character who simply wants something good to eat and people to follow Halloween traditions - is a pretty damn solid creation. So the film is not terrible... 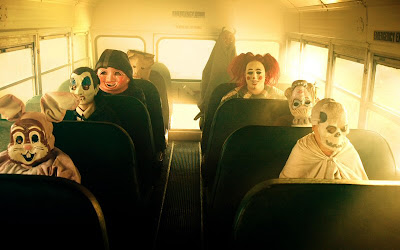 But I just don't get it...The glowing praise I've read in articles and comments not to mention what I heard during the Q&A after the film just doesn't match what I saw on screen. Scary? Halloween classic? Amazing music? Is that the film everybody saw or was that the film everybody wanted to see? Or did I just psych myself out because of the high expectations?

So what were my problems with the film? Let's see if I can lay them out:


Perhaps it's all due to my unrealistric expectations and that mood change I had just before the film started. That's certainly bound to affect my feelings towards it and I'll admit that. However, the film didn't do a damn thing to help alter that feeling either. 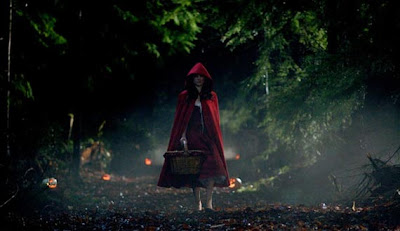 I'm with ya on this one Bob. I always have a hard time enjoying anything when there are no likable characters and there certainly weren't any here - selfish is the perfect work.

The comic book framing device seemed to work for the fans but I lost it when they said "Earlier" and then later in the film "Earlier" again. I wonder if I would have have worked better as 4 seperate stories.

It certainly has it's audience. That was pretty surreal.

This is the first time I'd ever heard of the Trick R Treat...but even with the negative review, I still really want to see it. The screenshots look amazing and I think that with my expectations much lower than yours were, I'll have at least an okay time, right? Haha. As far as comic book framing, it fucked up the Director's Cut of The Warriors and I'll never forgive it for doing so!

Hey Shannon...I'm glad we were sitting together as I felt better walking out of that screening knowing I wasn't alone. I'm still probably being too hard on it, but I gotta stick with my initial opinion...

Scott, yeah, I think you'll at least have an OK time. Part of my grumbling is likely due to the fact that it could have been so much more. It does indeed look great and I didn't hate it...

Of course, if you like it, then I'll go out and find that director's cut of The Warriors and post a ringing endorsement of it! So there...B-) Actually, I've never seen the director's cut - I can't imagine why you would need that as a wraparound for it?

"Aside from Sam, none of them evoked much feeling at all. The fat, selfish, candy grabbing boy that elicits taunts from the audience was there. So was the supremely bitchy girl who commanded her troops as she tried to play a joke on the mousey-looking girl. Don't forget the sluts, the cranky old man or the dweeb at the cash register."

I'm behind on a LOT of recent horror films, but in reading reviews, I've noticed a trend--in addition to poor ones not being scary, there seems to be a heavy emphasis on stereotypical, hated characters.

Even if this film is not scary, that second screencap was pretty nightmare-inducing.

"that second screencap was pretty nightmare-inducing"

Yeah, you would think it would be, but the film just keeps missing those opportunities. Then again, maybe it wasn't trying for them...Perhaps going for a safer more mainstream appeal? But the director himself railed a bit against mainstream type films, so who knows...

I do agree that the writers of many of these films just can't seem to create interesting characters. Again, I suppose that isn't that different than some of the 80s slashers that recycled the standard kid-types (virginal final girl, etc.), but it just seems so very worn out now...