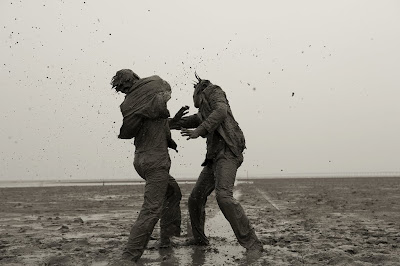 I'll be honest...During last week's Toronto After Dark Film Festival I did not expect to hear the name Kim Ki-duk bandied about a great deal. Especially not in relation to one of the films being screened. Ki-duk is the "arthouse" auteur responsible for such fare as "3-Iron", "Spring, Summer, Fall, Winter...and Spring" and "The Isle" - all films that I greatly enjoy, but simply wouldn't expect to find gaining a foothold at a genre film festival. So I was surprised to see his name attached to the Korean entry "Rough Cut". It was one of 3 films he wrote and helped produce in 2008, though in this case the director's reins were handed over to one of his proteges (Hun Jang). It managed to both retain a bit of that Ki-duk stamp to it and also wow a Wednesday night audience at the festival.

It's not quite the action movie its trailer bills itself as though...It's actually much more:


1) It's a character study of two individuals...Soo-ta is an actor that behaves in real life a bit like the characters he plays in his own movies - in other words he's selfish, considers himself tough and treats people poorly. Kang-pae, on the other hand, is a gangster following the code of his profession, is tougher than nails and treats people how they (in his mind) deserve to be treated. He's always wanted to be in movies, though, and has seen all of Soo-ta's films. These two characters also represent different sides of each other (nicely defined by the contrast of their clothes) and are original, interesting and have complete arcs during the film.

2) It covers its thematic ground extremely well...One of the central themes of the film deals with the consequences of living outside of your reality. Given much of the film takes place on a movie set, who's to say what may or may not be real (an alternate title of the film is "A Movie is a Movie")? Soo-ta has been having a rough time of late in the acting world. Though he is in the middle of shooting a new film, no one wants to co-star with him since his temperament has put him in a bad light with his peers. Concerned about his public image as well, he only meets his girlfriend underneath an overpass in a rented vehicle due to the possibility of gossip leaking out. After meeting Kang-pae one evening, he gets the idea to ask him to be his co-star. Kang-pae is indeed curious about being in a movie, but tells Soo-ta that he never fakes anything - so if he takes the part, all the scenes (particularly the fights) have to be real. In Soo-ta's case, he can only act tough around Kang-pae when he uses dialog taken from a script. 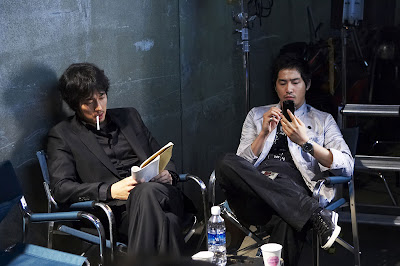 3) It's an action movie...It's not balls to the wall action, but when it does occur, it's bracing. Even the one-on-one conversations between Soo-ta and Kang-pae are filled with enough tension to feel as kinetic as an action scene. And the final battle between the two of them (all muddied up and looking pretty much identical) is one for the ages.

4) It's entertaining as hell...As much as I like Ki-duk's films, I wouldn't necessarily classify them as "entertaining" - at least not in the smile-on-your-face sense of the word. But "Rough Cut" manages to meld the grand themes, the action and the characters into one terrific 113 minute chunk. There's a good deal of humour here as well, not only between the two leads, but from the director of the film within the film. And even though he has some of the funniest scenes, he never once gets too broad with his antics or reactions.


As Soo-ta steps slowly back into the real world, Kang-pae steps a bit out of his (falling for his leading actress, keeping bits of information from his boss). I could easily see Hollywood wanting to recast the movie with their own picks and tweaking a number of the darker elements of the script. That would be a travesty though - this film ought to be seen as it is with its theme and storyline intact as well as with its two tremendous leads playing those characters. It's simply a great film. 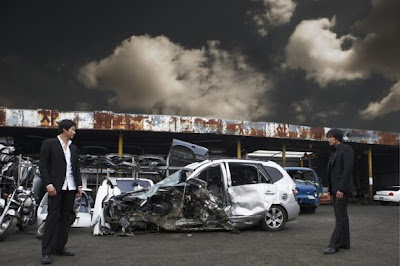 Hi 1minute...Thanks for stopping by. I guess many Koreans aren't typically Kim fans, but "Rough Cut" has apparently done great business there. That's nice to see that something as dark as this is (though it has many of the lighter, entertaining aspects too) can do so well.