Toronto After Dark 2009 - "Someone's Knocking At The Door" 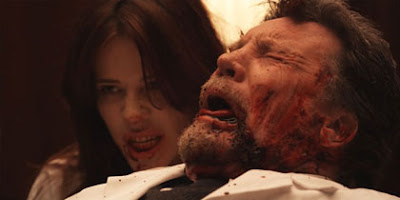 It's funny how expectations can really affect your movie going experience. Going into Tuesday night's screening of "Someone's Knocking At The Door" at the Toronto After Dark Film Festival, I was somewhat apprehensive. It was by far my least anticipated film of the entire schedule as the trailer gave me a vague unpleasant feeling that it would be not just violent, but very mean-spirited and vicious. The trailer certainly got across the Grindhouse feel of the movie, but I felt that I would walk out wanting a good shower. Don't get me wrong, I know that I'm attending a "genre" film festival where one sees all sorts of mayhem and horror on screen. This one felt hateful though - I can't put my finger on why, but that was the vibe I received. Meanwhile, one of my friends was greatly anticipating the same film. He too got the Grindhouse feel of the trailer, but not the hateful aspect. He expected it would be a film that had fun with trying to create never-before-seen scenes of depravity.

At some point in the screening, our opinions of the film crossed paths - mine went up and his dropped. It's nowhere near my favourite experience of the festival, but it surprised me by not being completely about the violence. It experiments with sound and editing, depicts hallucinegenic trips and has a few too many overly talky sections - in other words, it really is close to a Grindhouse style film. It's not all entertaining, but it all fits into the context of the story. What about all that promised depravity you say? It's still there and intense (should I mention the "reverse birth" sequence?) and ends up being effectively disturbing since it isn't wall-to-wall. 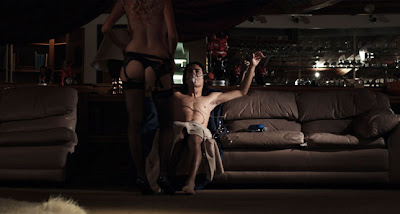 Lead actor Noah Segan talked after the screening about how he was intrigued with the concept of someone using drugs recreationally, but with the result that they end up "breaking something" - in other words, crossing a particular point from which they can't return whole. The example given was of a person on acid who removed their shoe, thought that their foot had remained in their shoe and began to worry that he was now permanently "broken". The concept is explored via several selfish and rather despicable medical students who one night take an experimental drug called Taldon. They've holed themselves up in a filing room in the basement of their medical school and as the high kicks in, they review the particularly nasty case history of John and William Hopper - two serial murderers who sexually abuse their victims. The drug seems to allow the Hoppers to come back and stalk each student in turn.

Though not the sickening story that I had feared, it isn't really a joyful exprience. Due to my expectations, though, I was able to glean more from the film than many others I spoke with afterwards. I liked seeing how they adopted certain Grindhouse and 70s filmmaking conventions, but also brought other modern aspects to it. The use of sharp, quick edits and a variety of sound effects was an effective way to heighten the confusion and sensory overload of a drug trip's residual effects. It would be wrong to look at the film as simply a "Kids, just say No" warning against drugs. I think it's closer to "It's your choice, but be aware of the possible consequences...". Of course, when one of those consequences is that you may get attacked by a man with a phallus the size of a log, I'd have to say it's probably a pretty good deterrent. 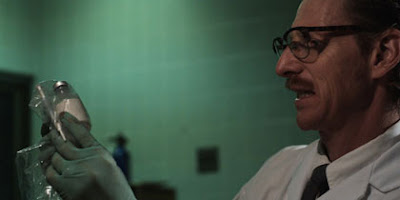