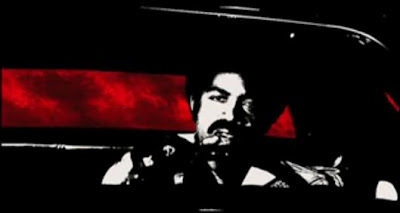 Now THAT'S how you kick off a film festival!

Scott Sanders' homage/spoof of 70's blaxploitation films "Black Dynamite" was an unqualified success on Friday night's opening of the Toronto After Dark Film Festival. A near capacity crowd roared with laughter from pretty much start to finish. I'm talking tears-streaming-down-your-face fun.

Now it's probably unfair to frame the film as belonging solely to director Sanders - star Michael Jai White was one of the co-writers and manages to create a character that is simultaneously ridiculous and also the coolest guy ever. His physical presence dominates the frame when he's on screen as does his deadpan delivery of threats and recriminations to all the bad mofos. His comic timing is spot on as well. His character alone demands a sequel because, dammit, he's "righteous". 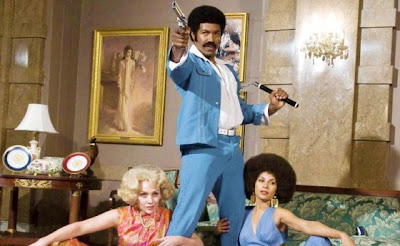 The key to the film is the perfect balance the makers have achieved in poking fun at the genre, but also paying respectful tribute to it. These are guys who know these films and enjoy these films. The characters may be one dimensional, broadly drawn and speak in either catchphrases or long, drawn out and deeply serious monologues, but that's the intent. The film has fun with these characteristics, but never mocks them. And there's so much to have fun with - the choppy quick editing to make the action scenes feel more exciting, the many zooms and quick pans to faces (all of which are done as if the cameraman couldn't quite get it in one smooth motion), the many flashbacks, the exposition ("I'm Black Dynamite and you're my 16 year-old little brother..."). And don't let me forget to mention the music...There's some great funk beats dropped all over the score of the film as well as incidental music taken straight out of "Charlie's Angels" and "Cannon" era TV shows. According to Sanders in the post-film Q&A, much of the stock footage used was also taken directly from those same shows. Many of the problems of low budget filmmaking are fodder for the humour in the film (a very funny boom mic moment, stock footage that doesn't quite match up, continuity errors everywhere, etc.), but they don't try to hammer them home. Just as you get the joke, they move on to something else.

I haven't mentioned the story yet have I? That's not because it doesn't matter or because it's non-essential to the film, it's just that there isn't simply one single thread - it's (in the spirit of the genre) all over the place. The plot initially revolves around Black Dynamite avenging the death of his kid brother, then moves to his determined effort to clean up the streets of drug dealers and finally winds up with a conspiracy by "whitey" to keep down the black man via...well, I won't spoil it. Along the way our hero encounters and dispatches all sorts of kingpins - just when you think you've met the big boss, he gets killed off and there's another even bigger boss to deal with. The ending gets a bit too silly, but by that point you've already had an entirely satisfying and almost constantly entertaining time at the movies so it's easily forgiveable.

The highest compliment I can give the film is that my eagerness for it to come out on DVD or (hopefully) to a theatrical release is not just because I so very much want to see it again, but because I can't wait to share it with others. 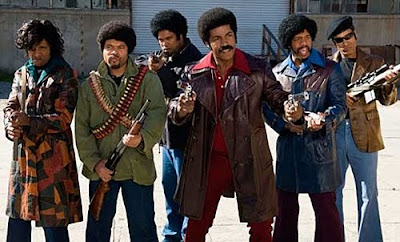