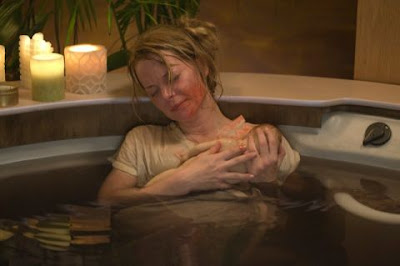 Paul Solet's "Grace" is not your regular horror movie. It should be though - this is the kind of horror film that gets under your skin, burrows a bit deeper and then settles in...As the closing film of the 2009 Toronto After Dark Film Festival, it had people squirming in their seats, but also praising the structure, pacing, cinematography and wonderful build up of tension. Though "Black Dynamite" remains my favourite film of the festival, "Grace" may indeed be the best film I saw there.

Director Solet told the audience that they should ignore some of the news that came out of Sundance regarding the film. There was much publicity at the time of a few people actually fainting at screenings. "It's just hype" says Solet. Of course it is, but considering the nerves the storyline hits and the close-to-home nature of watching a parent struggle to help their baby, it's perfectly understandable to me how the film could create a very visceral reaction. Mostly known around the festival as the "zombie baby" movie, it takes that idea so much further than what you might think. Sure it would be fun to see babies leaping out of cribs for people's throats, but that's not the direction "Grace" took.

For Madeline, sex has become simply the mechanism for getting pregnant. She's had two miscarriages and is fiercely determined to have a child. Once she becomes pregnant via her husband Michael, we begin to learn more about her other obsessions - being a vegan, her environmentalist concerns and her absolute determination not to use a doctor for her child's birth. She decides to use her old classmate Patricia as a midwife even though her mother-in-law strongly objects. Michael and his father-in-law are almost peripheral to these discussions about what is best for the baby - they try to support their partners, but they really have no say in the matter and there ends up being a great deal of tension as the pregnancy moves forward. In her last month though, Madeline is in a car accident and is told that her baby is dead. She insists, however, on bringing it to term. Never once does she seem to mention or be concerned that her husband Michael is also dead. 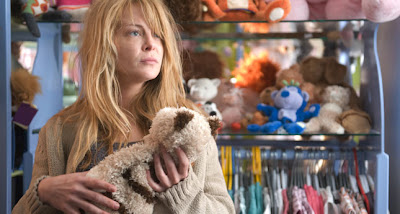 The birth scene is a textbook example of how to create unease in your audience. Taking place in a large bathtub in the offices of the midwife, Madeline's screams and the nervous camera truly bring the entire process to a fever pitch. Especially when you know that the baby is still born. Or is it? Can a mother's love actually will a baby to life? Whatever the case, baby Grace has arrived. Having just lost her own son in the crash, Madeline's mother-in-law Vivian now turns her attention to the newborn. She cannot fathom leaving the little one in the hands of her daughter-in-law and begins to try to get the mother deemed unfit to raise it. Considering the state Madeline is in (listless, letting her house go and barely cognizant of the outside world), it seems like it may be a good strategy.

Madeline's condition is caused by Grace's unique needs. She's a breast feeder alright, but isn't looking for milk...As Madeline realizes what her child requires, she takes actions beyond what she would normally do. Barely being able to occasionally cook meat for her husband, now she buys up half the butcher's counter to try to satiate her baby. Other means are necessary, though, and now both Madeline and Vivian are in positions where they will do anything for "their" child (both have already sacrificed by marrying weak-willed men).

The straight line tension Solet builds throughout the picture is pretty much perfect. The disturbing scenes of the film have less to do with the images then they do with the context of those images. Could you do that? Would you do that? This is an accomplished film where all the pieces work and fit seemlessly together. The cinematography is of special note in bringing yellowish tones to the house scenes and making a doctor's office look like a church, but I really can't fault anything. Except perhaps the audience's reaction at one specific moment: a woman uses a breast pump and as the camera cuts to a close-up of the bottle and the first sploosh of liquid into it, a loud "ewwww" arose from the crowd. You would've thought they were watching some slimy green ooze come from her body instead of simply breast milk, but credit the film for bringing its audience to a point where the two are pretty much equated. 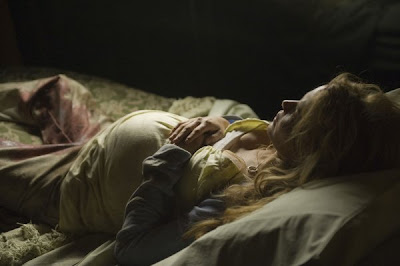 We caught a screening of this at Sundance and were blown away. You're right, Grace does get under your skin and makes itself a home there. Even now, thinking about that last scene makes me cringe.

Thanks Scott...I was just talking with a co-worker today about our kids and she laughed and said "I tell ya, my kids do suck me dry sometimes!" It made perfect sense in the context of what we were talking about, but I immediately recalled the film and flinched a bit...

Of course, I then had to tell her about it. She didn't sound convinced...B-)