Basking In The Cesspool Of Filth #15


About once a month, several Toronto film bloggers, writers and ne'er-do-wells get together at a local pub for an evening of fun, frivolity and film discussion. You'd think a solid 6-7 hours would have conversation lulls, but rarely does that happen. It always feels like it's over way too soon, though, and we scatter back to our computers to quickly look up the details of a movie mentioned or to validate our position from an argument (ie. prove the other person WRONG! I'm looking at you Hatter...).

So amongst the discussions that covered "The Room" (as absolutely terrible as you've heard and almost as funny), the 5-hour version of "Fanny And Alexander" versus the 3-hour one (5-hour version in a walk) and the merits of a fictional tri-part film with each of three action directors taking the helm for one portion (I'm not at liberty to divulge the details...), Kurt mentioned the following creep-tastic short film:


It's so good, I felt it deserved it's own Cesspool post. Even The Academy agreed - it snagged an Oscar nomination back in 1993 and deservedly so. It still looks pretty damn good 17 years later and retains all its spookiness. You may want to preview it before showing it to any of the wee ones though. You may also want to preview it with your hands over your eyes. Just make sure you watch straight through the credits.

As an addendum, having just watched Wes Craven Clive Barker's "Nightbreed" the other evening, I couldn't help but bring to mind this guy while watching the short: 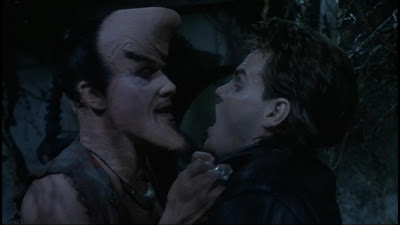 Psst! Nightbreed was made by Clive Barker, not Wes Craven.

The Sandman is a wonderfully creepy short. I think I blogged about it a couple of years ago. The director, Paul Berry, was one of the model makers for Tim Burton's The Nightmare Before Christmas. I know that this isn't a shocking development, given what his own work looks like.

A particularly bad Brain fart considering Barker's name is RIGHT THERE in the film's title on screen. For some reason I've mixed up Craven and Barker before

Thanks for the details on Berry - nope, not overly shocking. Unfortunately, it appears he passed away in 2001 at the age of 40. Way too young, especially for someone that talented.

Seems like we were at different ends of the table a lot! That short looks really creepy! I am still flabbergasted over all the love for Out of Sight. I just don't get it. I'm used to not getting the love of everything, but this one I really just don't... get.

Yeah, we kinda crossed paths a lot at the pub. I can understand not loving "Out Of Sight" as much as many of us, but I'm a bit surprised you don't see why we do...The style is oozing from this film - if the seduction scene between Lopez and Clooney gets mentioned a lot, it's because it is a thing of beauty (flipping between the lovemaking and the hotel lobby "foreplay", but with the same audio of them talking over the whole thing is very effective at really showing their chemistry. The film is funny too - Michael Keaton, Don Cheadle, the accidental shooting, etc. Lopez has never been better either - she was terrific here. The prison sequences and breakout are fast and snappy. And on and on...

But that's OK. There's plenty of widely popular films I'm not getting either, so it's "all good" as the kids say.