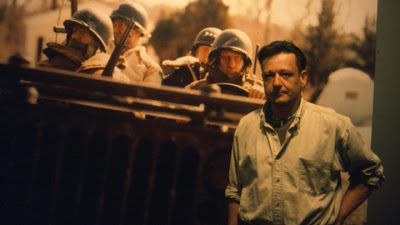 After spending 40 days in a coma - the result of a brutal beating outside a bar - Mark Hogancamp woke up. He woke up a different person, though, with significant brain damage and a great deal of memory loss. He now needed to somehow build a new life and get on track, but he just wasn't sure how to do that since professional therapy was too expensive. But at least he wasn't drinking anymore. If there's anything good that came from his hospital stay it's that he no longer had a taste for alcohol. It just doesn't appeal to him now, whereas previously, it was the focus of his life. He states that he hasn't had a girlfriend in over 9 years - 5 of those have been since the incident and the other 4 before it were because he was always drunk.

There is something else good that came from all this though - his art. Or should I say, his therapy. In order to focus his imagination and help regain some control of the nerves in his hands, Mark has built an entire 1/16 scale replica of a WWII Belgium town in his backyard. It comes complete with vehicles, soldiers, a bar and, of course, 27 Barbies. The characters in his village have elaborate stories worked out for them on a daily basis and it all gets documented in hundreds of photos. These individual storylines play out fights, love affairs, suspicious behaviour and a whole lot of staged catfights between the Barbies. It's his imagination after all, so he can use it however he sees fit. He's trying to practice it every day after having it almost stolen from him years ago. 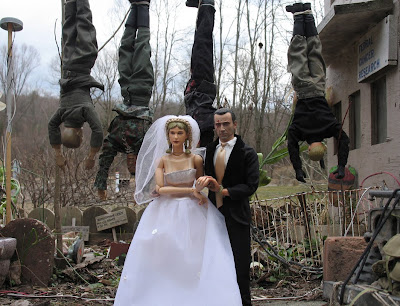 Jeff Malmberg's debut directorial effort is a remarkable experience and entertaining to boot. Like Hogancamp's own photos of these miniature characters, the film brings us right into a world completely alien to most of us. The dedication Hogancamp has to his daily work is impressive to say the least. The jeep his soldier characters use accompanies Mark on his long walks in order to get real wear and tear on it - he's actually put (scale-wise) thousands of miles on it so that it looks realistic in the pictures. New characters have backstories and old ones take turns moving to the fore of a day's events. Many of the new characters are named after and even slightly resemble Mark's real friends and acquaintances. Malmberg uses these dolls to help introduce the real people he talks to and this small connection between the two worlds helps us get a better understanding of how Mark's obsession is actually slowly helping to heal him.

He still has plenty of anger to work out and Marwencol can sometimes be a violent place. Though the British, American and German soldiers all seem to get along there, unwanted visitors can show up unexpectedly. Death and mayhem aren't strangers to the confines of the town, but his anger comes out in many different ways. Mark admits that the staged wedding for his alter ego inside Marwencol is much better remembered by him than his actual wedding many years ago - you can't help but wonder how he feels when he looks at pictures of his ex-wife and has no recollection of a life with her (though he does note that she was pretty good looking). He even incorporates a time machine (built from an old VCR) into his stories so that he at least has some way of going back in the past. While Mark uses these scenes and photos to work things out, several of them made the pages of a small art magazine and before he knew it, he was displaying them in an art gallery in New York City. The photos are truly quite amazing (especially when blown up to real life size), but "what if your therapy became art?". There's no easy answer to that question, but "Marwencol" sure gives us some insight into one fascinating individual's experience with it.
Posted by Bob Turnbull at 20:41

Holy crap, this was sitting in my "awaiting moderation" queue for over a year! Man, I'm sorry Blake...Even pithy comments should be published! B-)

I hope you've had a chance to catch up with the film - it really is wonderful.