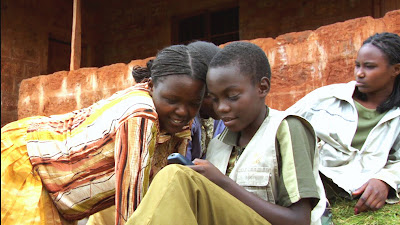 I'm pretty sure I just saw the Audience Award winner of Hot Docs 2010. If I was a betting man, I'd plop a nice chunk of change down on "A Small Act" coming out on top after all the votes have been cast. Sure the Rush documentary has the built-in fan base and is a ton of fun (and it just won the Tribeca Audience Award), but Jennifer Arnold's latest (a finalist for the Grand Jury Award at Sundance) is warm, triumphant, hopeful and inspiring without ever being the slightest bit mawkish or sappy. It's basic premise is that anyone can make the world a better place - if not on a grand scale, at least by making a difference to individual people - one small act at a time.
The main through line of the film is the story of three young Africans from a small village in Kenya. They are all smart and have loads of potential, but their families lack the funds necessary to put them into high school. Without some form of assistance, they will likely get sucked into the cycle of poverty so many have before. This is where the Hilde Back Educational Fund comes into play. It has been set up by a former resident of the same village to help those students who show promise, but lack the financial station to pay for their early education. Chris Mburu heads the fund and simply wants to pass along the same type of act of kindness that was provided to him when he was of the same age and couldn't afford schooling. It came from a middle age Holocaust survivor who had fled to Sweden and was looking to give something back and help someone just like she had been helped after leaving her home country. Her donations (to the tune of about $15 a month) gave Chris the chance to acquire an education. And that he did. After attending Nairobi University, he went to Harvard, became a lawyer and now works at the United Nations as a human rights attorney specializing in areas like genocide. He never forgot that small gesture from a woman he had never met, so he named a new educational fund after her. 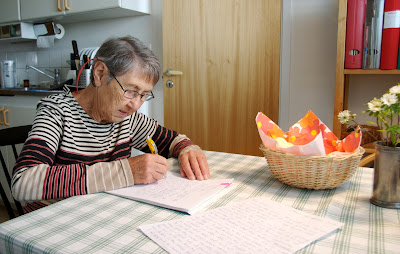 Though the current storylines all take place in 2007, the film backtracks a bit to cover the creation and launch of the Hilde Back Educational Fund. Chris invites and meets for the first time his benefactor and it begins a relationship that continues to this day. Hilde is just as sweet and loveable as you would hope her to be and her interview segments are scattered within the rest of the film to complement Chris' own view of how we can all contribute towards changing injustices and inequalities. As if by design, all these issues and points of view are highlighted and brought into sharp focus when Chris and his board of directors try to make their final decisions as to who will be the recipients of the scholarships - right during the unrest that followed the late 2007 elections in Kenya. Without education, Chris says earlier in the film, people are essentially ripe for exploitation. Given the ethnic violence that erupts, you'd be hard pressed to argue the point with Chris.
Arnold has a sure hand with the pace of the film and never loses sight of the storyline while also juggling these many issues and side trips to Sweden (to see Hilde) and Switzerland (where Chris works at the U.N.). The three children in Kenya (Kimani, Ruth and Caroline) are all studying for the KCPE National tests which run for 3 days and determine whether students are allowed to move along to high school. Those children with the highest scores on the test and valid financial need will be considered for the final 10 spots for the scholarship. Kimani, Ruth and Caroline certainly have the financial need - Caroline's parents don't even own land and can barely afford lamp oil for her to study in the evenings. These are lively, intelligent and determined kids whose entire families are essentially depending on them to continue their education. Not everyone can be helped, but Chris wants to at least start somewhere.
The day before my screening of the film there was an article in the Toronto Star about a philanthropist who spent a year donating his time to various agencies. He claims that "fewer than 25 per cent of Canadians with salaries above $80,000 donate to charity". I don't know how accurate that stat is or whether it includes non-monetary contributions (time, article donations, etc.), but if that remaining percentage could see this film, perhaps it might inspire them to contribute in some way of their own accord. You can't help but wonder what even just a few additional small acts might do.

Hey Bob,
I'm hosting the My Best Post blog-a-thon.
It goes from May 21st-23rd. Want to be a part of it?
It's pretty easy. You've already written your entry.
Just send me a link to your best/favorite/underrated blog post! Thanks!

I would like to invite you to the Toronto Youth Shorts Film Festival launch reception on Friday June 4th from 7pm- 9pm in the Snowball Gallery at 1690 Queen St. W. Come mingle with our filmmaking guests and receive firsthand knowledge of our festival lineup and industry special guests.

Should you wish to attend, we would appreciate if you could RSVP by Monday May 31st. We hope to see you there!

The Toronto Youth Shorts Film Festival is a volunteer, non-profit initiative that showcases films made by young people in the GTA to local audiences. Going into our second year, we work with community partners in the industry to provide a forum for young filmmakers to showcase their work in our community.
Regards,