Scribblings Of A Random Nature #16 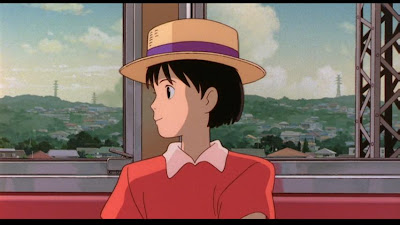 Sparrow (2008 - Johnnie To) - You know how we all have those films, actors and directors that we just don't quite get? Beloved by millions, but we just scratch our heads and wonder "Is it me? What am I missing?". Johnnie To kinda fits that mold for me. The prolific Hong Kong director (25 credits in the last decade alone) always has great looking films and some truly magnificent moments, but I just can't get involved in any of his stories. His characters follow either terrible stereotypes or behave in fashions that immediately inspire rolling of my eyes. And I can only take so much of the swelling music during male bonding moments or blood brother betraying blood brother. "Sparrow" is a bit of a different animal for him and actually lands high up on my list of Johnnie To movies - it has very little dialog and feels somewhat like a musical without the music (I stole that concept from someone, but it fit very well). The single shot of the 4 pickpockets working a busy street early on and the late in the film umbrella scenes were expertly handled and gorgeous to boot, but...It all falls into many of the same-old-same-old To-isms. I didn't care about the characters, there's melodrama brought to moments that simply don't require it and there's a strong cheese flavour to it all (e.g. when the sparrow flies back into his room - after being chased out initially - Simon Yam looks at it, puts his hands on his hips and gives it a shaking-head-grin as if to say "You little scamp! Your incorrigible!"). I really wish his films worked better for me. 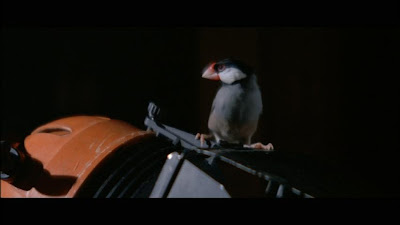 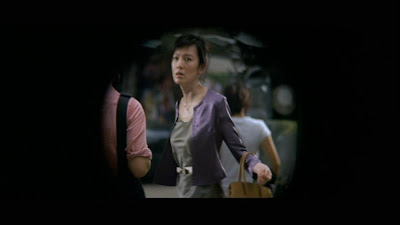 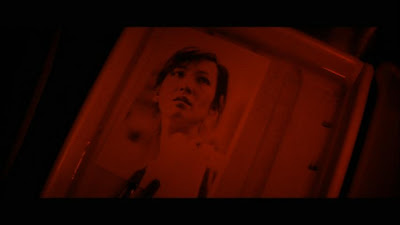 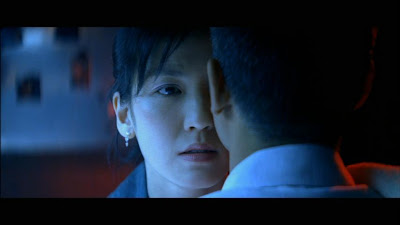 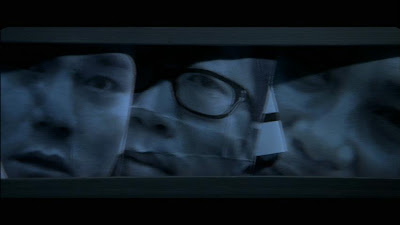 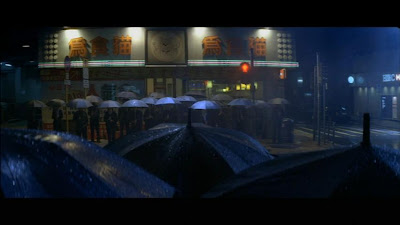 Whisper Of The Heart (1995 - Yoshifumi Kondo) - It's over an hour into Ghibli Studios' "Whisper Of The Heart" before anything fantastical happens. Up until that point (when a dapper looking upright cat called The Baron holds a young girl's hand and begins flying through candy-coloured clouds), everything has been rooted in reality. No mystical beasts or talking animals or wandering spirits - just a confused teenager, her family, friends and those darn boys. The Baron, however, is the product of that teenager's imagination, so the story remains firmly in the real world and outside of the stock and trade of Ghibli's creative fantasy worlds. Given that, how come this fairly straightforward "coming of age" story about young love and choosing one's path in life is just as beautiful and even magical a film as anything else the Anime studio has put out? The simple nature of the story is one of its strengths. It allows us time with the characters and so doesn't rush from plot point to plot point. "Listening to your heart" has been proposed many times in film and literature as the single guiding factor for life's decisions, but in never quite as subtle a fashion as here. The film never gets too preachy, but instead it simply weaves its story and its characters (realistic ones at that) through its theme. And of course, the whole film is gorgeously drawn, painted and animated. The fantasy sequences with The Baron are wonderful, but it's the surroundings of Tokyo that really benefit from the individual hand coloured frames. Director Yoshifumi Kondo (who sadly passed away a few short years after completion of this film) once again doesn't rush things. Kondo was mentored by Hayao Miyazaki (who contributed the screenplay, storyboards and some production duties) and you can feel his guiding hand everywhere - particularly in the quiet moments. 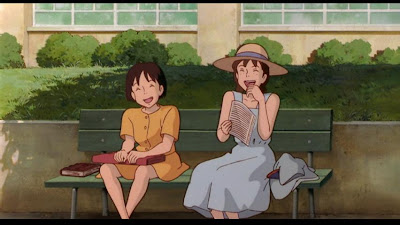 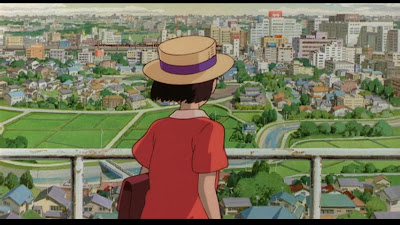 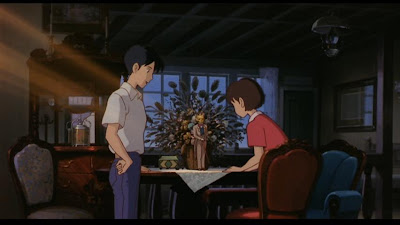 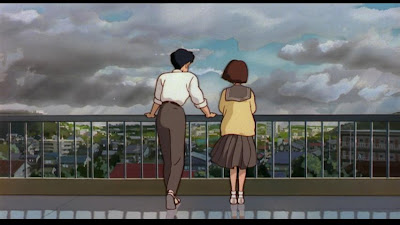 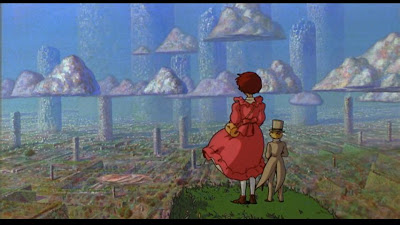 The White Stripes Under Great White Northern Lights (2009 - Emmett Malloy) - The White Stripes are a bit of a conundrum to me...I'm not overly familiar with their whole catalog, but I typically find myself sucked into their songs whenever I happen to run across one. I love the idea of Jack White forcing the limitations of two instruments and two musicians (well, 1 and a half - no offense to Meg White, but she has her own boundaries as a drummer) on his songwriting and being creative within that framework. I approached the film (a cross-Canada tour of every province and territory with most of the focus on the Northern territories) with a bit of trepidation. Wouldn't those limitations on the songs become a bit boring after awhile? Not so much actually - I found enough interesting elements and solid riffs to keep me interested in pretty well every tune they played. Where the film really shines is playing with the red, white and black colour scheme the Whites have imposed on themselves (yet more limitations) - of course, travelling through Canada with our glorious red and white flag provides many key opportunities to exploit that scheme. The shifts between grainy black and white footage, beautiful outdoor photography (especially in the Northern climates) and vibrant colours gives plenty to look at while the band plays in outdoor venues, bowling alleys, community centres and larger halls. The issue I have with the band, especially in the film since it contains many interview segments, is that I don't believe a damn word either of them says. Granted, that's part of the whole package of The White Stripes, but it gets irritating after awhile listening to yet another story of their approach to music and their fans. Of course, that may be exactly what Jack White wants me to feel... 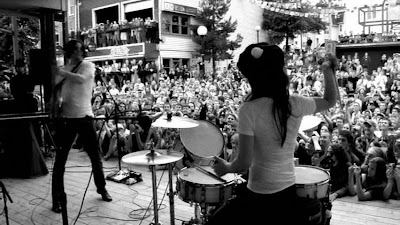 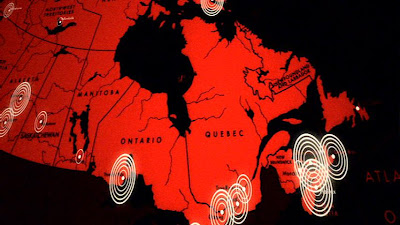 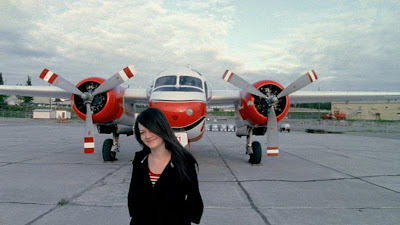 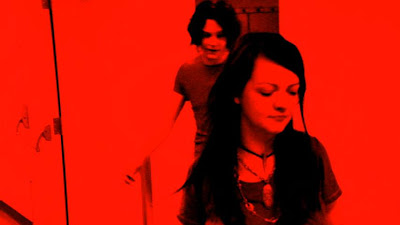 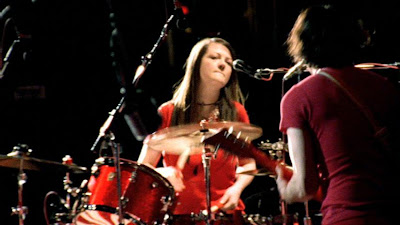 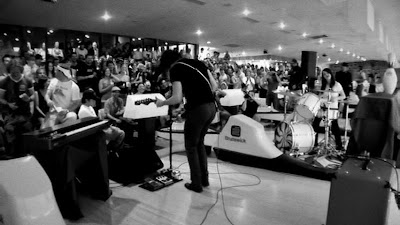 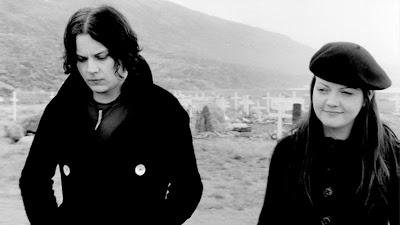 School Days With A Pig (2008 - Tetsu Maeda) - School teachers have a difficult job these days. Not only do they need to keep a classroom full of kids in line and attentive, but some parents expect more than just the curriculum basics to be taught. There's an expectation that they will learn "life lessons" that will stay with them forever. So what do you do if you're a rookie teacher taking over a Grade 5 class and bringing them all the way through to when they graduate Grade 6? You want to involve the whole class in a group project that will mean additional work and responsibility and somehow instill a larger meaning. And if you're Mr. Hoshi, you try something new. You bring a piglet to class and tell your students that they will all help feed and raise the pig until they graduate - at which point they will eat it. If that sounds like an odd way to impart a lesson and even slightly far-fetched, then you might be surprised to know that "School Days With A Pig" is based on a true story (there was even a documentary made to recount its events). In this fictionalized account, things play out pretty much as expected - the pig is adorable, the kids face challenges, grow to love it and then must decide whether they should go through with the original proposal of killing the pig for food. It's how the film does these things that is of greater interest. First off, though it occasionally struggles with a bit too much sentimentality (bordering on maudlin), it never preaches or forces a specific viewpoint. The film actually becomes its own teacher's aid to discuss the issue at hand - where does our food come from and should we not consider that when we eat it? The arguments pro and con regarding whether the pig (named "P-chan" by the students) should live or die at the end of their elementary schooling are expressed in equal portions and tone. Almost all of those opinions are expressed by the students themselves with little or no guidance from the teachers or admin staff. That brings us to one of the other interesting facets of the film. During two very long segments (one of which lasted a full 15 minutes), the children debate the issue amongst themselves with their teacher only stepping in to ensure that the discussion remains civil. Each position is covered from just about every angle as every child in the class gets their say. Apparently, Maeda filmed these scenes with numerous cameras in the class and with little to no script for the kids. The idea was to achieve a natural and realistic feel to the discussion. Though admirable and occasionally very effective, it doesn't quite work for several reasons. The child actors are actually quite good throughout the film, but for much of these debate sections it feels like they were given specific viewpoints to raise just so that all angles were covered. The back and forth flow seems hampered by this and it also extends the scene way past the point of being useful (and, frankly, entertaining - I expect that many of the 8-12 year old target audience might be shifting in their seats before long...). Where the film does shine, though, is when these kids are left to be themselves. Maeda captures several wonderful moments of almost documentary-like interactions between the kids as well as with P-chan. As long as the adults are off to the side and the kids can be themselves, the film has a fun charm to it that should easily translate to its audience. 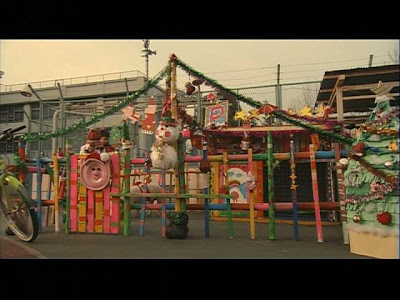 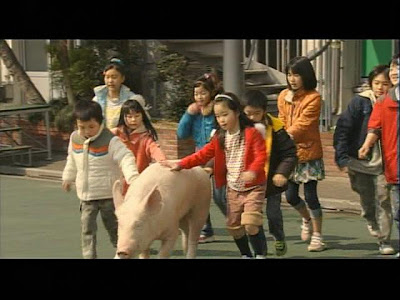 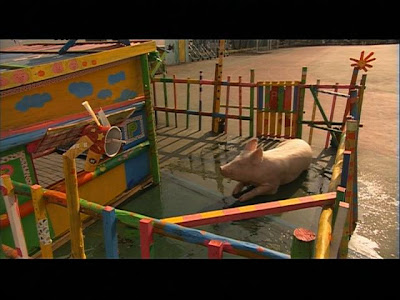 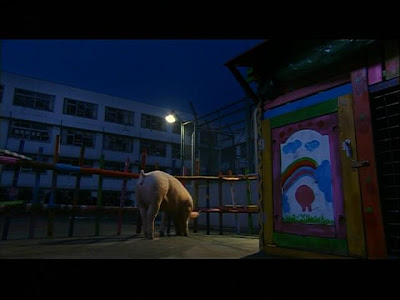 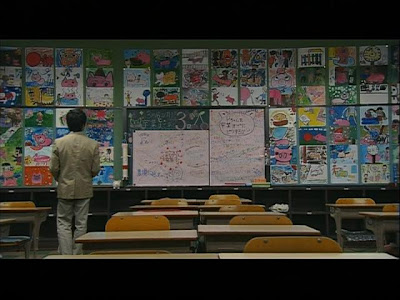 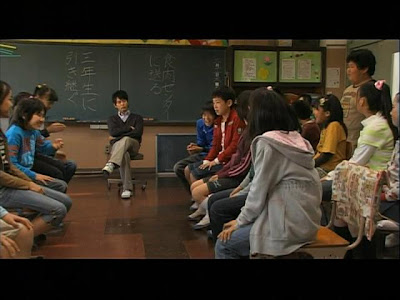