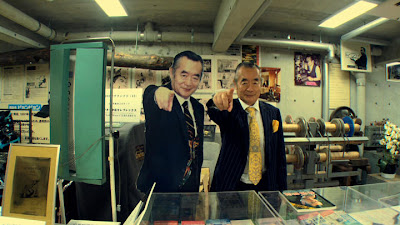 Dr. NakaMats claims he sleeps at most 4 hours a night. What's keeping him up? Well, he might claim it's because his armchair "Cerebrex" invention helps refresh him during the day, but he really just doesn't have the time. With 3357 inventions under his belt (over three times more than that underachiever Thomas Edison), more in development, speaking engagements (he claims he is one of the 12 most expensive speakers in the world), TV guest appearances, Sumo wrestling and an 80th birthday party to plan, he just can't afford to waste time sleeping. Fortunately, he also claims that he will live to be 144 years old, so he's got that going for him too. Dr. NakaMats runs through his list of accomplishments: he claims to have invented the floppy disk, the Love Jet ("over 10000 women tested"), a motor that runs on cosmic energy and heat, a water fueled bicycle and scads of other gadgets and concepts - that sure is an awful lot of claiming for one man...

So what is the amazing invention mentioned in the title of the film? It appears that it's actually Dr. NakaMats himself. His real name is Yoshiro Nakamatsu and he does indeed possess a creative mind that has helped him hold the record for most number of patents. But do they all actually work? If the only proof that something works is the inventor telling you it works ("I invented this glass table. It cannot be broken."), is that enough? When you listen to him describe the awesome powers that his Brain Drink provides him or how his Love Jet is enabling the women of Japan to get more out of sex (and therefore solve the nation's biggest problem - declining population growth), you get the feeling it's more about selling himself than the products. As a matter of fact, there is not a single solitary thing Dr. NakaMats says in the entire film that isn't about him. His main goal for his birthday party is that the hotel convention room he is booking be renamed after him. He explains to the poor, beaten down hotel employee that he could lose face in front of all his guests if the room name isn't changed and that the employee should fight harder for his request. If it doesn't get approved by the hotel boss than that boss should be fired. Dr. NakaMats, after all, deserves respect. 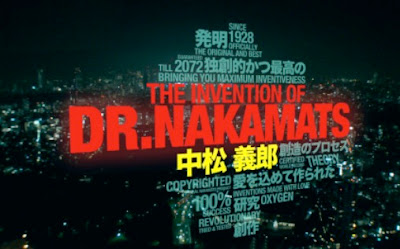 Director and visual artist Kaspar Astrud Schroder has put together an amazingly entertaining portrait of this nationwide celebrity. You can see some of Schroder's visual arts background coming out in the look of the film - in particular the fast motion cityscapes and terrific and very original titles - but he also brings a light touch to show NakaMats as combination snake oil salesman and beloved entity. The jaunty plucked violin score that underlies each of the good doctor's invention descriptions certainly adds some skepticism to the proceedings, but you might already be a bit wary when he talks about his method of selecting a quality camera by smelling them individually. Then again, he has won the Ig Nobel Prize. No, not the Nobel Prize, the Ig Nobel Prize. In this case it was for photographing and retrospectively analyzing every meal he has consumed over the past 34 years - a strategy which has enabled him to determine the 55 components of his special elixir for his health.

His wife seems on board with the recognition he receives (and demands) and is equally concerned about the proper respect owed to him. His children? Well, if the enforced "Take 2" of their presentation to him of his birthday gift and one of the most awkward father-daughter hugs on record are of any indication, they may have a different perspective. His mother is on board though - he speaks with her daily and even gets ideas from her for new inventions. The fact that she's been dead for some time now doesn't seem to have really impacted her input. He also gives much credit to his Underwater Invention Method which enables him to get maximum brain power (by getting "as close to death as possible") while capturing the ideas as soon as they pop up. Perhaps that's where he got the idea for his greatest invention of all - Himself. 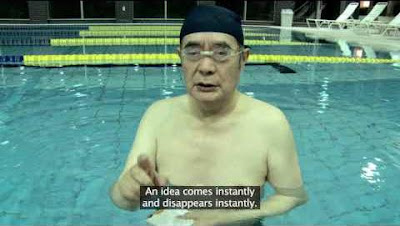