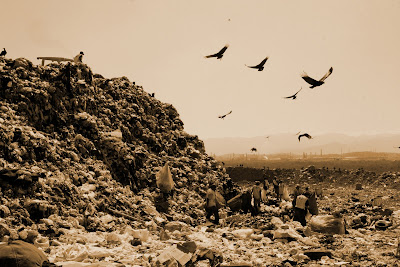 "It's where everything not good goes - including people."

The Jardim Gramacho landfill outside of Rio De Janeiro is the largest in the world in terms of the volume of refuse received to it on a daily basis. It's rolling hills of garbage give the ground the consistency of Jell-o as hundreds of "pickers" walk through it every day to collect recyclables for money. 200 tons of recycling a day get removed by these people, many of whom live in the slums just outside the dump. Though for some they can make a "decent" wage ($20-25 a day), it looks like a horrible life. The people we meet though - the pickers - are wonderful, delightful and full of life.

Lucy Walker's film "Waste Land", though, begins in a completely different realm than this landfill. Things start in New York City, as we follow Brazilian-born artist Vik Muniz. His tools of the trade are mostly non-traditional items which he uses to create pictures that he then photographs. Thread, wire, chocolate syrup, caviar, diamonds, pigments and sugar are some of the objects he has used for his work (his photos of the pictures he has created from sugar are stunning) - not looking like much on close inspection, but becoming something beautiful at larger distances. Similar to how his hometown of Sao Paolo is described...

Given this, it's not much of a stretch to imagine him wanting to work with garbage. This idea (and the film) quickly move beyond just a simple document of his latest series of works though. Once the decision to go to Jardim Gramacho is taken, it doesn't take long for them to meet some of the pickers. His approach is to take photos of some of his new acquaintances, project them on the floor and them fill them in with a variety of recycling material pulled from the landfill before the final photo is taken. 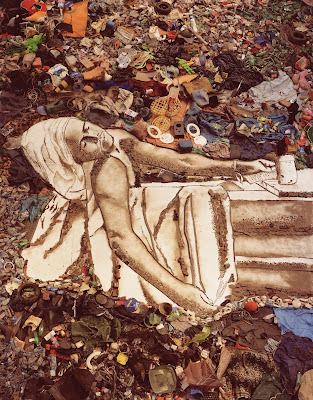 It's a pretty fascinating project and the final works are lovely - especially when viewed from above the large warehouse floor where they are built. However, the focus of the film, and the most interesting sections, are about the people who make their livings at Jardim Gramacho. Muniz himself is absent off screen for a good chunk of the film and, even though he is a very engaging and intelligent artist, isn't really missed at all. Not when you get a chance to meet: a young man named Tiao who can compare Machiavelli's "The Prince" - a book he found in the dump - to Rio and who is the President of the Association of Pickers (a group he formed for workers rights), an 18 year-old mother of two named Suelem who is proud of her honest work because it isn't prostitution and the strong-willed and restaurant-trained cook Irma who makes the meals for many of the pickers from what can be found in the new loads of garbage constantly streaming in.

Each of these people (and several others) are open, friendly and willing to help Muniz with his endeavour. You might even think that they are happy with their lives, but as they get a taste of the fuller set of possibilities that exist outside of the landfill you can see they don't want to go back. They are proud of their work, but they want more out of life. Walker's camera follows each character in order for us to see their current lives close up and hear about how they managed to end up here. Strangely enough, even though a focus point of the film is the largest landfill in the world, there's a great deal of beauty throughout the film - Muniz's artwork, the gorgeous skies over Jardim Gramacho and the faces (real, photographed and drawn out of garbage) of the characters. This mix of art with the many different stories and angles makes for a truly superb film (winner of the World Cinema Audience Award at 2010 Sundance).

A final coda to the documentary gives updates on all the main people we meet - some stories happy and some unfortunately not. To have these intelligent, beautiful people stagnate in a place like this is really the biggest waste of all.
Posted by Bob Turnbull at 21:36