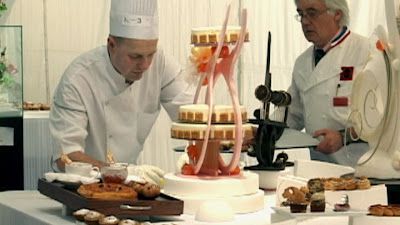 Kings Of Pastry (2010 - Chris Hegedus, D.A. Pennebaker) - How does a film about 16 of the world's best pastry chefs competing in their version of the Olympics as filmed by famed doc directors Pennebaker and Hegedus end up being a disappointment? Not bad mind you, just not as good as it really should have been. Like many of these types of documentaries, we follow a few of the participants before and during the event to get a better idea of who they are and to build some tension for us and create some stakes. At least that's the idea in theory. Here it only half works...The three chefs we follow all seem like talented nice guys who deserve to win, but we never got a chance to really understand who they are, why they are doing this or even to see how they make their creations. We get to see some of the end results - some of the sugar sculptures and statues are truly works of art - and maybe even salivate a bit, but I never felt a strong connection to any of the participants (except perhaps for one "Oh no!" moment). Nor did I ever really get an idea of what distinguishes one chef from another. Given the subject, I should probably finish by saying something like "a nice snack, but not a very filling one...". 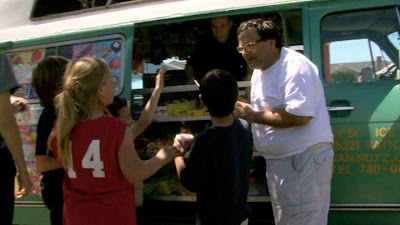 Candyman: The David Klein Story (2010 - Costa Botes) - Jelly Belly jelly beans are one of the most popular candies in the world. Their wide variety of flavours, bright colours and intense taste are wrapped up in tiny little sizes perfect for munching. Because of this popularity, the owners of the rights to the candy are quite wealthy. It's just a shame that the inventor isn't as well. David Klein is that inventor and due to circumstances and an overly generous nature, he gave up the rights many years ago - for a decent amount of money, true, but nothing close to what it was really worth. The best parts of the film show the inner workings of a candy factory, some of Klein's other candy inventions and a wealth of really awkward 70s talk show footage (the Mike Douglas footage alone is cringeworthy), but the character piece focusing on Klein is somewhat lacking. I couldn't quite put my finger on why though. Klein seems an affable person, goes out of his way to help others, loves to put smiles on kids' faces and is still a very creative person, but his ambivalence to really trying to do anything further with his life is aggravating. So I can't blame the film itself, just the person at the centre of it. 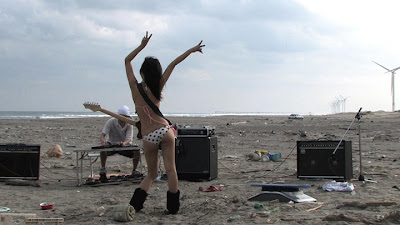 We Don't Care About Music Anyway (2009 - Cedric Dupire, Gaspard Kuentz) - It is readily apparent early on in Cedric Dupire and Gaspard Kuentz's "We Don't Care About Music Anyway" that none of its subjects really care about music. At least not from the point of view of creating something for your iPod or stereo system. The subjects are all artists who have a desire to create sound. There's no melody in their creations, not a great deal of structure and only occasionally could you say there was rhythm. It's frankly not even enjoyable to hear. That doesn't mean it isn't interesting though. The film is essentially a series of performance clips (either with a live audience or staged for the camera) interspersed with Tokyo city scenes and black and white sections of the entire group discussing their methods and approaches to this type of art. They bandy about sentences such as "Conformity is defined by a social consensus" and "Japanese have a poor notion of happiness", so these are not people that are content to settle into the "norm". They want to break apart the standard conception of what you can do with an instrument, what an instrument really is and how sound affects most people. Does a cello have to be played by pulling a bow across its strings? Does the tone arm of a record player have to have a needle connected to it to generate a signal to be amplified? Do you really need to know how to play an instrument at all in order to create something with it? Not according to this group. It's the approach each member takes that I find the most interesting. The results are the kind of experimental work that I have found that I don't enjoy as standalone pieces, but that I'm glad exists. Within context, it can provide either an interesting message or a completely new way of looking at something that will reap benefits further down the road.
Posted by Bob Turnbull at 19:02

Oh wow, sounds like a series of near hits there! I was *this* close to going to King of Pastry yesterday and now I don't feel quite so bad about missing it. The competition-based doc is a popular format now and can really hit it out of the park at times but I guess not always.

Your review of We Don't Care About the Music Anyway has got me interested in it again though, at a curiosity level at the very least.

For CANDYMAN, what was lacking for me was a little bit of vision. I mean here we have the story of something that makes people the world-over very happy, and at the heart of its story is a very quirky dude...yet the doc is very dry and straight-forwards. I have to wonder how much more we would have liked it with a more creative sense of storytelling.

Shannon, I think you might still like Kings Of Pastry - it's still entertaining and the food looks phenomenal, but it just didn't quite capture great characters or dive into the secrets of being a pastry chef.

Hatter, I think you're right...I was trying to put my finger on why I wasn't overly into the film and rested it upon Klein, but yours is probably a better explanation. Again, it wasn't bad by any stretch, but a different way of telling the story may have helped.