One thing I really enjoy about Asian Horror films (ie. consider this to mean the J-Horror genre plus additional ghost stories out of Korea, Thailand and Hong Kong) is not only the atmosphere they create, but the sometimes subtle ways that the ghosts and spirits of the stories appear. They don't even need to seem menacing to achieve their affect.

So far in my Scary Movie viewing this month, I've come across a couple of these really effective, creepy and unsettling ghostly apparitions. Unfortunately they've shown up in a couple of films about which I'm pretty ambivalent. And a third that is...well, I can't decide.

I'll start with "The Booth", a recent Japanese film about a radio studio booth that saw the suicide of a talk show host while he was on-air (the film opens with this event). Years later, a fast talking host of a relationship issues talk show is forced to bring his crew down to this booth for a single evening's show. The old studio hasn't been used in many years and is simply to act as a temporary home for that night's show. As the evening wears on, we learn about the selfish DJs treatment of his fellow workers (the producer, news girl, etc.) via phone calls that seem to mirror what he has done. As well, details about past events in his life begin to emerge as strange things begin to happen in the studio. Given the film's modest 75 minute run time and reasonably interesting premise, this should have been a snappy entertaining ride. Sadly, it doesn't quite manage that since the main character is not only unlikeable but really annoying both on and off the air. It still delivers a couple of solid creepy moments, but just not enough happens.

Near the end of the film though is a spooky sequence where he becomes stuck in the booth with the ghost of a woman from years ago. Her image is bleached out, a bit sepia toned and partially see-through. She starts out looking off to the side, but you know the eyes will suddenly be staring directly back at the camera - and it still makes you jump a bit when it happens. I gotta say, she unnerved me a just wee bit... 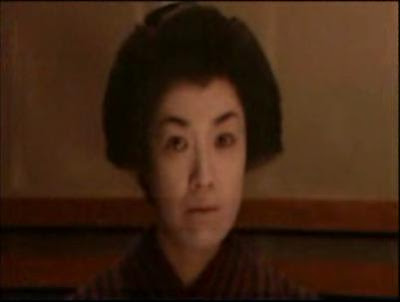 Next is the Thai anthology film "Bangkok Haunted". Three separate tales are pulled together with a rather flimsy wrap around story - three women discuss scary stories they have created. The film is over 2 hours long and really doesn't justify its length - each tale drags a bit longer than it should and seems to be a bit overly convoluted.

Story number one follows a young girl adopted by a family in the early part of the century. Her new brother is deformed, but they establish a loving relationship - though perhaps taken a bit too seriously by the boy. They grow older, she falls in love with another man and the consequences of what transpires continue through to the current day. Tale number two focuses on a young woman who is given a secret potion that completely ensnares any man of her choosing. Of course implications arise...The last story is a mystery surrounding the apparent suicide of a young woman. A detective believes it was murder and sets off on his own to convince everyone else.

It's near the start of the film this time that the most effective ghostly presence shows up. In the back of a truck a young man rests among some boxes reading a book. We see some long metal like fingernails moving towards him and they scrape his leg. Cut to the man's reaction as he looks at his leg and then his reaction as he sees what caused it...A ghostly pale woman calmly sits there considering her next move. 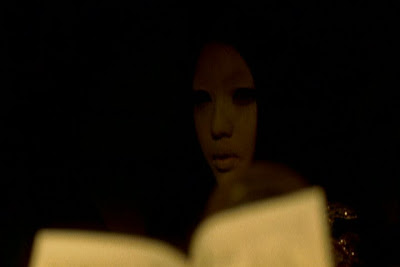 The last of my three examples is Takashi Miike's entry to Showtime's "Masters Of Horror" series - the rather controversial "Imprint". Initially turned down by Showtime as unairable on their network, it has made it out to DVD.

The basic story has an American man (played oddly by Billy Drago) searching for his lost love - a young prostitute he had promised he would one day return to find. He winds up at a brothel on a remote island and meets a disfigured woman who knew his lover. She tells him about the events that occurred and her own back story, but leaves out details that emerge in subsequent re-tellings as Drago continues to press. The first half of the hour long film is quite good - we still aren't sure where things are headed and are treated to some ravishing colours and sets.

And then...Well, three separate events happen: 1) a torture sequence, 2) the unveiling of the truth about the disfigured woman's mother and 3) the appearance of the disfigured woman's "sister". The first is wholly effective at making you want to completely avoid looking at your screen while the second is absolutely the main reason why Showtime would not air this episode...The third is both laughably ridiculous and really disturbing at the same time.

I credit Miike for making a film that almost no one else could or would. He succeeds remarkably well in utterly disturbing the viewer and providing totally horrifying circumstances. Not many scares, but plenty of horror. And yet, I couldn't possibly say that I was entertained...

Except that is during most of that first half. In particular one scene where Drago is listening to the woman's story of her relationship with his lover. We cut between her speaking and Drago listening. At one point while she talks, a shadowy face slowly arises over her right shoulder. Just as you actually notice it and half of its gaping mouth comes into view, we cut to Drago's frightened reaction. It's timed perfectly so that I'm betting the majority of people who see this for the first time on DVD will say "Did I just see that?" and likely rewind to get a better look at that looming ghostly presence. I know I did and my reaction was "Cool..." Unfortunately, the screencap from a YouTube trailer below doesn't quite do it justice. 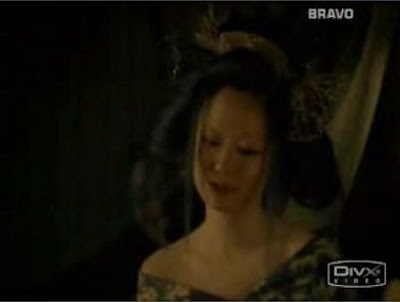 Though I don't necessarily recommend any of these films, it does show that you can still find items and moments of interest in lesser films. It's something that I've grown to greatly appreciate about the art form of film - you never know when you'll come across something memorable.
Posted by Bob Turnbull at 22:50