As Toronto After Dark Film Festival director Adam Lopez was fond of calling it, Sunday was Z-Day (that's Zed for Zombies - yes Zed, not Zee). The two back-to-back zombie film screenings preceded by a Zombie Walk through the city attracted hundreds of the undead. I'm not sure how many tourist dollars you can squeeze out of walking corpses, but I suppose at the very least it makes for good PR.

Unfortunately I missed the zombie walk event, but from the throngs of blood splattered folks waiting outside the theatre to queue up for the first of the zombie flicks, it must've been a lot of good clean fun.

And now for the messy variety...


There was a great atmosphere in the Bloor Cinema as we awaited this first film by director/writer Steven C. Miller. It looked to be sold out and probably every other person had some kind of zombie makeup or prop to get into the spirit. Choruses of "Brains! Brains!" rang out in anticipation.

Previous to the film beginning, Adam Lopez mentioned that this was the first part of a planned trilogy and warned that the film has an abrupt end with a cliffhanger. So does the story warrant 3 straight films out of the box from a novice filmmaker?

Well, it all starts in familiar territory. We meet the teenagers who will become fodder for the zombies: the cheerleaders, the fat geek, the spoiled rich jock...Just a whole bunch of really unlikeable people. I know we're not supposed to invest a great deal of emotion into many of these characters since they will die nasty deaths, but I do wish some additional thought would be brought to bear for the initial period of time we are forced to spend with them. If the intent was for me to want to see them get killed, then the filmmakers succeeded. Unfortunately I not only hated some of these characters, but I disliked entire scenes they were in and hoped they would just stop talking. That can't really be what you want from your film...

So let's focus on the scenes when no one is talking. Those would be the scenes when everyone is screaming. Though the movie is indeed "energetically directed" especially through the zombie attacks, it's just too much...Too much shaky camera action, too much booming pending doom music cues and too much screaming while heavy metal clanged on the soundtrack - and typically all at once. You know how your picture looks like when you speed up a DVD to 4x? That's what a good deal of this film looked like. It's an exhausting assault on the senses. At times and in small doses it can be effective, but I felt it took away from what could have been a more interesting set of zombie attacks.

It did seem to take a somewhat different route than perhaps what some of the fans in the crowd expected. In particular, one zombified fan sitting next to me threw his hands up in what appeared to be frustration about 10-15 times during the film. I could only guess that he was upset that a specific event did not occur when it was supposed to (e.g. nudity did not happen when it normally does; lingering shots of entrails did not occur when they should have; etc.). I'm not sure why the filmmakers should need to follow the conventions that closely in order to please certain fans, so for not doing that I applaud them.

The plot really starts towards the end of the film when we learn about the origin of the zombies. Earlier, they had just shown up one day, caused havoc and chased the townspeople. But these new plot elements may point towards some interesting avenues the story may take in the sequels.

I just don't know if I care. 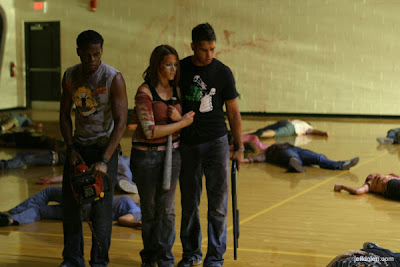 Poultrygeist: Night Of The Chicken Dead


Pound for pound the most disgusting, over the top, politically incorrect, bad pun-filled, potty mouthed experience ever. "Juvenile" is probably the best term for Lloyd Kaufman's new film which brought Zombie Day to an end. It did however provide all the nourishment the hungry zombies in the audience were looking for as hoots, hollers and cheers filled the packed room. 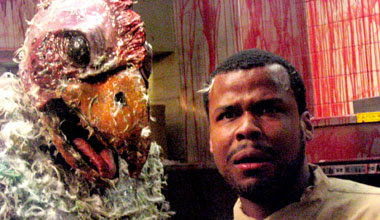 Kaufman's film is a satire of the fast food industry, but also pulls in all number of ethnic stereotypes and political references in an attempt to throw as many satiric elements out there as possible. Subtlety NOT being Lloyd Kaufman's middle name, it's not always effective. In particular, the political jokes fall flat as they were typically of the obvious variety. And though stereotypes can indeed be used to good effect for satirical purposes, it loses its impact when overused. On the plus side, at least he doesn't play favourites with who might get offended - conservatives, liberals, heterosexuals, homosexuals, Mexicans, Muslims, Jews, meat-lovers, vegans, etc. all get barbs thrown at them. Repeatedly.

The story centers around the opening of a new fast food chicken restaurant that was built on a sacred Indian burial ground. Young Arbie happens across the demonstration with no real investment, but sees amongst the protestors his old girlfriend Wendy - now in the arms of another woman named Mickey (yes, there is indeed a common theme to the naming of the characters). After some back and forth verbal sparring and a song (did I mention the film is also partially a musical?), Arbie decides to get a job at the restaurant just to taunt Wendy. He meets fellow employees Denny, Carl Jr. and Paco Bell.

Don't worry about the rest of the plot - just know that many people eat bad things, spew great amounts of green, red and brown fluids from MANY different orifices and that zombie chickens rip people to shreds (as one female zombie chicken prepares to eat the face she has just peeled off another customer she says "I know it's not good for me, but I just love the skin!"). Though occasionally amusing, I tired quickly of the high school boy humour, the "dirty word" humour, the plentiful scatalogical references and the bountiful fluids being spilled. But if you didn't like a scene (say perhaps you would have preferred a different orifice be the focus of a particular moment), you really didn't have to wait long to see something else. Of course, be careful what you wish for...The songs weren't overly memorable either, though this particular one does lodge in your brain (Warning! The video contains graphically disgusting scenes...):

Having said all that above, there was a sense of fun about the film. Very much an anything goes approach that sat well with most of the audience. And when the audience is having fun (even if everyone at once turns away from the screen with groans of disgust), you can't help but catch some of it. The two leads in the film (Arbie and Wendy) are relative newcomers and were actually quite good at shifting between song, slapstick, dry humour and whatever depravity was asked of them. And the movie is not without its clever bits - whether it's a snippet of song's lyrics, a passing pop culture reference or a background joke or sign. Of course, those good bits are usually trampled over by what follows, but I can't help but hand it to Kaufman...In a post film Q&A, he spoke a bit about the troubles he faces in getting investment and distribution for his films. Not surprising, but still remarkable in that he presses forward with what appears to be good humour and warmth. 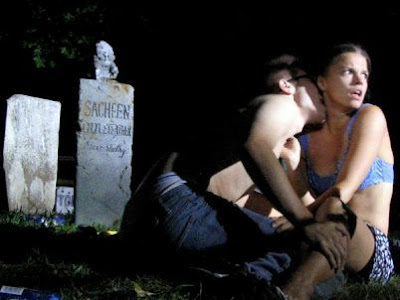 So even though neither zombie film quite did it for me, the evening was still wholly entertaining.


Each of the zombie films was preceded by a Canadian zombie short - both quite well done and funny: 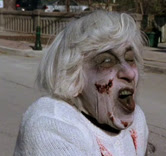 A young woman revisits her hometown to see her estranged Dad who is the local pastor. Her timing kind of stinks though since Jesus has just risen - as a zombie. He's taken most of the congregation with him, but the woman still thinks she should try to communicate with her Dad - zombie or no. Some of the zombie footage was actually taken at last year's Zombie Walk. 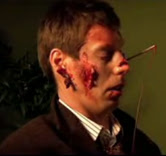 A young woman's parents are on their way over to meet her new boyfriend. She's had bad luck in the past with introducing her gentlemen friends into the family, so she's really trying to make this work. Unfortunately, her boyfriend dies before they get there. Fortunately, he has just brought home an ancient stick capable of raising the dead. Understandably, complications arise after she uses it...
Posted by Bob Turnbull at 14:35