I'm as guilty as the next person when it comes to throwing around generalizations about film genres. It's hard not to because sometimes it can help you to express your point. So of late I've been falling back on "Asian Horror" to express my preference for horror films that have creeping dread, a sense of foreboding and instill fear via their atmosphere and subtle effects. Both Thailand's "Alone" and Japan's "Nightmare Detective" share some of these traits, but are also vastly different films. It just goes to show that generalizations are typically only good up to a certain point. Though, uh, not as a rule...


You know a scary film is working its magic when an entire theatre audience (and a packed one at that) begins to giggle nervously at the beginning of new scenes. A woman alone in a bathtub? "Oh boy, something's gonna happen here!" She's walking alone into an elevator? "Now what'll show up?" So they know something is coming, everyone is anticipating it and they can't wait...

"Alone" is an incredibly effective piece of filmmaking. Perhaps Banjong Pisanthanakun and Parkpoom Wongpoom's follow-up to 2004's well received "Shutter" is not the most original piece of cinema you'll see, but it succeeds in just about every way in scaring and entertaining the audience. 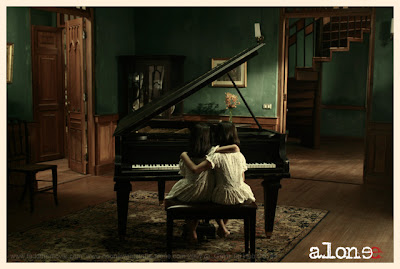 The film mixes slow creepy sections with a number of sudden jump scares. Though some films pack in the jumps without any context, "Alone" deserves each and every one through its powerfully built up suspense. You know it's coming, you almost even know exactly when it's coming - and you jump anyway.

Pim and Ploy are two conjoined sisters who are separated in their youth. Only one survives and the film begins in her present day comfortable married life. After returning home to see her dying mother, the spirit of her dead sister begins following and haunting her. Through flashbacks we learn more about the relationship between the two girls which had always been very loving - until a boy came along and changed things. The boy falls in love with one of them and this leads to friction, arguments and eventually the separation.

The key to the film is the framing of each scene. You keep expecting to see the ghostly twin appear in the many mirrors, car windows or door openings that pop up throughout. These open spaces reinforce the "aloneness" of the remaining twin and it's also a perfect way to build the anticipation for the next appearance. And the film delivers on every long build up of tension by providing the big release moment of fright.

So all those giggles of nervous energy get transformed into screams and then laughter as the audience relaxes back in preparation for another buildup. And from the crowd's reactions, they wouldn't have had it any other way. 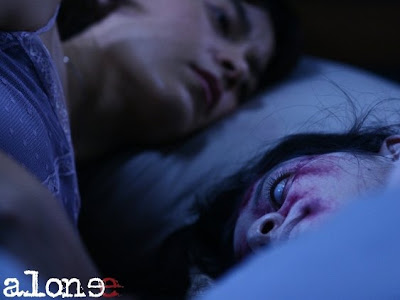 
As new detective Keiko Kirishima (played by the absolutely lovely Japanese pop star Hitomi) begins to investigate a series of suicides, it appears that they may somehow be related. Each of the dead people were apparently last talking to the same person on their cell phones before they took their lives (having dialed '0'). We discover that these people have been influenced into killing themselves by a single person who has the ability to enter their dreams.

Kirishima recruits the services of a young loner who shares that same ability to enter people's dreams. In his case he sells his services to try to help others get rid of their nightmares, but he is at the end of his own rope. He is unable to continue the back and forth travel between reality and dreams and has built up a hatred of people in general. Between the two of them they realize that someone will have to place that call to '0' and it will likely be Kirishima. 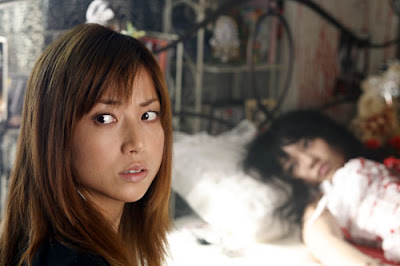 Director Shinya Tsukamoto (from "Tetsuo, The Iron Man" fame) brings to the film his unique view of humankind, technology and death. He is often compared to both David Lynch and David Cronenberg as they all share a warped, surrealistic view of life. This time, Tsukamoto leaves most of his nightmarish visions to the nightmare world - but he still leaves a mark.

The suicides are brutal in nature, bloody and messy - typically involving someone stabbing themselves repeatedly while asleep. And then there's the nightmares themselves...Filled with headache inducing sound and fury, the dreams early in the film don't ever really show what is so terrifying, but they certainly indicate it. The victims are usually alone, scared and apparently being stalked. The thunderous sounds that accompany the approach are frightening enough, but to then cut back to reality and see someone opening up their own throat is an altogether different kind of unnerving event. I must admit that my over-tiredness caught up with me a few times and the repeating "sound and fury" of some of the dreams zoned me out a bit. That just made it all the worse when I snapped back.

An oddly hopeful ending does nothing to erase the deeply unsettling world Tsukamoto has put before us. The dreamworlds are bad enough, but the characters' reality didn't seem much better. Japan has a difficult problem with high suicide rates, but imagine how much worse it could be if it was easy enough to make someone say "I never knew I wanted to kill myself". 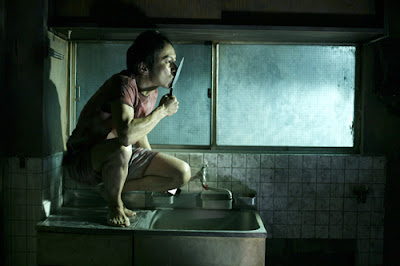 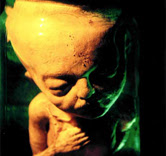 An interesting premise of a woman grappling with the reasons for the death of her one year old and what God really wants from her. Does she need to behave in a really bad manner in order to prevent God from taking her too soon? And how would she ensure that whatever bad things she did weren't somehow for the common good in the end? A bit long, but an interesting spin on an old theme (questions of faith arising from the loss of a young child). 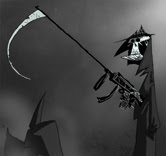 One of the best shorts of the fest. Great black and white animation (with a dash of key lime) depict one man's obsession with Key Lime Pie. Can Death tempt him with one last slice?
Posted by Bob Turnbull at 15:24

Thanks to your write-ups, I'm looking forward to checking out some of these films when they come out on DVD! I really like Shinya Tsukamoto's films and his latest sounds good.

Tsukamoto is a disturbing fellow alright...That's him in the second screenshot from the film (crouched on the table). I don't think I mentioned that he plays the "killer" in the film.

"Alone" is more conventional but it's done so very well...