It's probably not often that you run across common ground between whacked out Korean animation and a North American Indie horror film by a first time director. But when you do (in this case during Saturday's screenings at the Toronto After Dark Film Festival), it should be recognized...Both "Aachi & Ssipak" and "Blood Car" use an energy depleted world as their jumping off points for "what would humankind do?" scenarios. The former certainly has the more drastic view of how things could change, but both are funny, purposely crude and splatter numerous bodily fluids whenever possible.

And isn't that what you're looking for in your futuristic scenario movies? 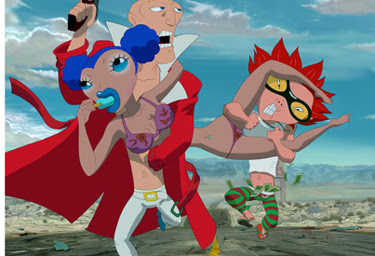 Todd Brown from Twitch gave a great intro to the film and wondered aloud "why aren't there more animated films coming from Korea?" Considering the amount of animation being produced there (for TV shows like the Simpsons, etc.), you would think that would drive further creative outlets. There's certainly enough inventiveness and originality at play in this film to have been an outlet for many an animator...

The story? OK, let me take a deep breath here...Set in some distant future where normal sources of energy have been depleted, society has changed to embrace a new source that scientists have tapped - human feces. In order to encourage the population to defecate more and use the feces for the greater good, the government not only runs all sorts of marketing ads, but also provide a reward every time someone "donates". Individual blue Juicybars (which look like frozen popsicles) are delivered immediately and are not only tasty but contain addictive narcotics. And thus an underground black market has been created. The biggest of the gangs involved is called the Diaper Gang - a group of small, blue mutants who are completely addicted to the bars. They pull off a daring theft of a truck load of the bars by wiping out its police escort, but then are foiled in their attempts at getting the loot back to their base by a one man wrecking crew cyborg created by a government mad scientist.

And that's the opening 5 minutes...

The film is filled with pop culture and movie references. The terrific mine shaft chase is straight out of "Indiana Jones And The Temple Of Doom", while references to "Misery", "Robocop" and even Paris Hilton crop up. Some of this stuff is a bit much (and really, Paris Hilton has never been funny as a reference point), but don't worry - the pace of this movie never relents so you'll find something new pretty quickly. It's actually quite exhausting, but not necessarily in a bad way. 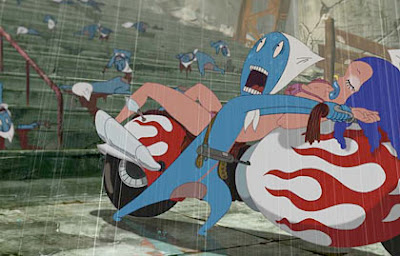 Though the characters Aachi and Ssipak are integral to the way the story plays out, it's interesting that the film is named after them. They aren't really that much more sympathetic than anyone else in the film and many scenes take place without them even being involved.

But I guess there must be a rule of marketing that states "Avoid the words feces or defecation in your film title". Probably sage advice. 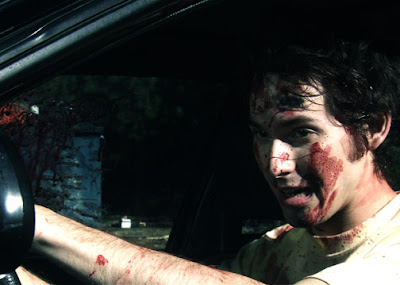 Though it's hard to imagine one could ever say that any film was similar to the whacked out "Aachi and Ssipak", "Blood Car" does indeed share a common beginning point. Sometime in the future (though possibly only two weeks from now states the opening prologue), the fuel shortage has risen gas prices to over $32 a gallon. No one drives anymore, people bring picnic blankets to drive-ins and teenagers have to resort to having sex in car graveyards.

Archie, a kindergarten teacher and vegan, has taken it upon himself to try to invent a new engine that will work on wheatgrass juice. He is concerned about the environment (as he shows by the ever present slogans on his T-shirts) and thinks an engine of this type would solve a great deal of the world's problems. Success eludes him though, until one night he accidentally cuts himself and manages to drip some blood into his fuel mixture. The engine jumps to life and he realizes that blood is the secret.

Black humour is the order of the day in this low budget first feature by writer / director / producer Alex Orr and he never shies away from it (particularly an ending that may even offend those who loved all the carnage). Archie's requirement to keep his car running becomes increasingly important to him once he meets Denise. She owns the local meat stand (opposite the local vegetable and wheatgrass juice stand) and loves to ride in cars. She is also more than willing to provide a wide range of "services" to Archie for continued use of the car. Hence his need to find more blood.

This leads to further and further acts of desperation on Archie's part. To feed the car, he starts by shooting small animals in his neighbourhood and eventually escalates to humans - first a neighbour he finds dead and then some of his own killing. He has additionally incorporated rotating blades in the trunk of the car in order to chop up fresh resources to provide blood directly to the motor. Kind of like a really big juicer. All the while, guys in suits are monitoring his every movement...This setup leads to many gross out, yet very funny moments. The film (also like the above Aachi & Ssipak) purposely attempts to offend at many turns and succeeded at getting any number of groans from the otherwise quite happy late night audience (it was an 11:30PM screening).

Along with a few missed opportunities at getting more laughs, there are some awkward scenes that stretch a bit long and could've used some tighter editing. Anna Chlumsky, in her first feature film in about a decade, also seems a bit out of place and not overly well used. But these are minor complaints to the obvious fun at work here.

There's an additional amusing moment I found that may or may not have been intentional...As our hero Archie comes over the rise on his bike wielding an ax at one point in the movie, we hear "The Barber Of Seville". The great 1979 film "Breaking Away" and the classic to top just about all other classic cartoons "Rabbit Of Seville" both use this music and this one scene evoked both of these favourites at once. I don't know if Orr had any thoughts about paying tribute to either of these other films, but it put a big smile on my face... 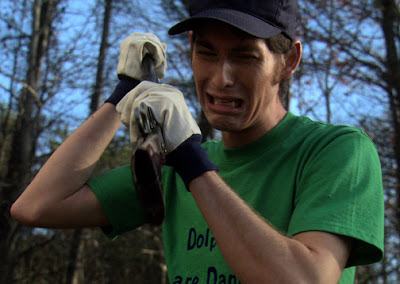 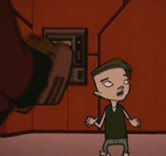 The question of what is reality is played with in this nicely done short. What appears to be a glitch in the virtual world dumps a young man into a completely foreign mostly mechanized world run by little white penguin like cyclops blobs. But even this reality may not be what it seems. 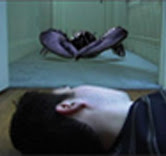 Lobsters are attacking. They appear to be slowly picking people off one by one. If that isn't bad enough, our young hero's girlfriend won't call him back.

Bob- I'm sorry you missed the blogathon, I was waiting for your to contribute something all along. Anyway, these two films are incredibly crazy! I enjoyed the trailer to the korean animation, its hilarious! Sounds like the festival is quite a trip.