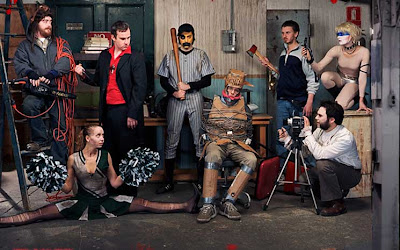 It would probably make more sense to bundle the review of "Murder Party" with its cousin "Blood Car" since both of them are American independent inexpensively made horror films with dark humour. Not to mention the fact that the two films will be touring North America together for screenings in different cities later this year. But I'm happy to do it as a stand alone. The final film of the week long Toronto After Dark Film Festival may be my favourite of the whole bunch.

It's inventive, sharply scripted and very well acted as it zips along through a rather disconcerting set of events for our poor hero. Walking home from his job as a parking ticket cop, he finds an invitation to attend a Murder Party that evening. Since it's Halloween and it appears that he has nothing better to do, he builds himself a knight's costume out of cardboard and heads out for his evening's entertainment.

It turns out the party is an atypical one...Besides the hosts (5 disaffected artists), he's the only attendee and, of course, the intended victim of the murder which is to be used for the sake of art - and the sake of getting some grant money. The film ends up being a very pointed satire (much more effective than something like "Art School Confidential") of the art scene and the "hipper than thou" members of it. Actor Chris Sharp was in attendance for a Q&A afterwards and confirmed that he and the other actors, writers and crew knew that scene very well...

There are a number of great little moments in the film...In one, our costumed knight finds himself in a closet filled with various pieces of equipment after escaping his abductors. While they wait for him outside, you see him looking around at all the tubing, fire extinguishers, etc. and you expect that he might build some nifty contraption that will enable him to get away. Instead, he throws open the door with an armful of the junk in the closet and then...throws it on the floor and tries to run away. Of course he's immediately recaptured and chained to the chair this time. During another escape, he stops for a quick bathroom break on the roof. While in the middle of relieving himself, one of the potential killers spots him and moves toward him. His reaction and attempt to quickly finish up is very funny.

All of these moments are very well staged and flow nicely within the story. And there just aren't any awkward moments. The film does slow down somewhat in the middle when another artist brings in some truth serum for everyone, but it never feels like they didn't know where to go next. There's even a few early setups of jokes that pay off later in the film, so it's evidence that they really thought things through.

The trailer doesn't really do the film justice in that it looks like it was shot for $1.99. In fact, you get used to the look pretty quickly and the camera work is perfectly suitable for the events. Part of the fun of the film is knowing that these guys did things on a shoestring budget and had to get creative. Even the effects work out quite well. They're pretty small at the outset, but grow as the story progresses and things eventually get bloody. Very bloody. And it works. 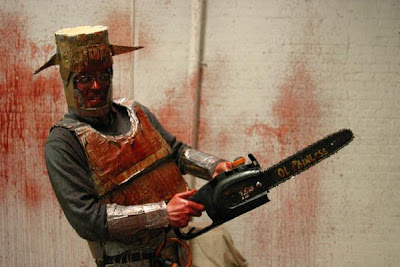 Given the end result, I have to think that the entire crew must've worked very hard, for very little money and in the end had a great time putting this together. It's already released on DVD in the U.S. from what I understand and Chris mentioned that they are already working on several potential follow-up projects. I can't wait...

The film was preceded by a double shot of Canadian short features: 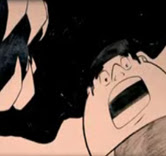 Can Chocolate Man save the day? He seems to be the only hope when a monster shows up to terrorize two friends. Only 4 minutes, but very funny and covers a lot of ground in that time.


The Tragic Story Of Nling 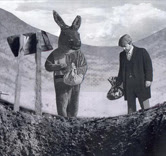 The denizens of a small island called Nling create a large walled cylinder into which they dump their garbage. They eventually dump their human refuse in there too, but supply them with alcohol to keep them happy. Until one day the alcohol stops coming...An interesting tale made even better by the style of animation: each frame was printed out on paper, cut out and then captured via scanner.
Posted by Bob Turnbull at 12:48

I am just kicking myself for not making it out to this one! Across the board it seems like it was the fave of the fest. I'm glad you enjoyed it.

I read a couple of reviews that just hated it, but it does seem to be getting mostly good comments. It's always hard to say...It just struck my funny bone in the right spot and I also found that they underplayed some of the scenes perfectly.

I expect it'll be out on DVD in the not too distant future (though I'd love to see that double bill with "Blood Car" show up in Toronto - probably at the Bloor).