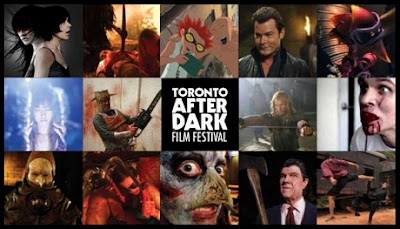 Have I mentioned I'm looking forward to the next few days? The Opening Gala of Toronto After Dark kicked off Friday night with a showing of "Mulberry Street" at the Bloor Cinema. Though I had to miss the initial festivities, I'm going to make the majority of the remaining films.

Along with the main feature films, the festival will also be featuring:

How to Explain Toronto After Dark Film Festival in just 60 Seconds!

I did mention this was going to be fun, right?

The festival has been so much fun so far! It's really wonderful that they have had so many of the directors available for the films so far, I love hearing the Q&A's.

Any favourites so far?

Yeah, it's been great...I plan to write about them all, but just haven't had the time yet.

"Aachi & Ssipak" was a lot of fun and in many ways is like an animated version of Poultrygeist (politically incorrect up the wazoo and over the top violence and splatter).

"Audience Of One" was remarkable...If only from the point of view of how self-delusional a human being can be, it may very well be one of the scariest films of the fest.

The zombie films were fun, but "Automaton Transfusion" was a bit too sensory overload for me. "Poultrygeist" was...um...how do you review a film like that? It was over the top in just about every conceivable way.

By the way, were you sitting in an aisle seat maybe 3 or 4 rows up from the screen on the left hand side (if you are looking at the screen) for Poultrygeist? I think I was sitting right near you...It wasn't until the house lights came up during Kaufman's Q&A that I thought it might be you (as you - if it was indeed you - were jotting down notes), but then the crowd got in the way before I could come over to say Hi. I'm going to The Rebel and The Tripper tonight, so I'll look for you. Or at least the person I think is you...B-)

Aachi & Sspiak is very much like an animated Poultrygeist, good point there!

I'm on the fence on Audience of One, I wonder if they took the religious mindset out of it how different it would be. Although that is a bit hard to do considering it is a documentary!

That was me, notepad in hand to boot! I sat their on Opening night and it's got great sightlines for short 'lil me, as well as being close enough to get some good picks. I'll be there tonight for The Rebel and maybe The Tripper if I don't get to tired. Hope to see you tonight!