Toronto After Dark - "The Tripper" and "Simon Says"


The Slasher film is an old staple of the Horror genre by this point, so what would an after dark film festival be without a couple of examples? This past week, Toronto After Dark screened both David Arquette's directorial debut "The Tripper" and the Crispin Glover vehicle "Simon Says" (directed by William Dear). And like many slasher films, they each use many of the conventions of the style and tend to fall into some of its pitfalls. Both films do at least try to bring some twists to the genre and contain a couple of surprises, but sometimes you really need to see results instead of just effort.


A group of young people take their old, drug-filled, blue van deep into the woods for a weekend of nature and partying. 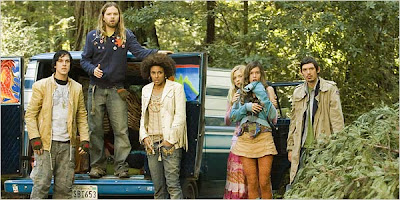 And go figure, many of them don't make it back...

The young people in question are "hippies" attending a weekend long musicfest in the forest with countless others. The rumours of deaths from previous years' shows don't seem to concern anyone except for the town sheriff. On top of trying to provide the additional security, he's caught between the hippies, the good ol' mountain boys, the mayor, the concert promoter and the crazy old man with a history.

The sheriff, played with deadpan perfection by Thomas Jane, is actually the only character about which to give a damn in the entire film. Everyone else is simply unlikeable and completely selfish. I know it's a slasher movie and most people will end up dead, but can we at least feel maybe a twinge of regret when one of the characters gets dispatched? If not, at least perhaps make their screen time be less of a painful experience. Jane's sheriff gets off a few choice lines at each of their expense, so perhaps there was some good to come out their appearances.

But this is a slasher movie after all (at least at its heart) - expectations of serious character development should be left at the door. So what of the terror and mayhem? Well, mayhem certainly occurs, but I don't really remember feeling a moment of terror, tension or even dread. I can't help but think it's because the movie is trying to be far too many things at once - comedic, politically aware, surreal, gory, environmentally conscious, politically incorrect, etc. It's a lot of hats to wear and none of them quite fit.

Getting back to the premise of the film, it does have its moments. The killer wears a Ronald Reagan mask and wipes out just about anyone he comes across in the woods (the film mistreats all political affiliations evenly - both by making fun of them and by slicing and dicing them). Though the killer casts a fine shadow as Reagan wielding an ax, he also speaks in Reagan-isms which, not surprisingly, are not overly funny anymore. And when he starts wiping out a large throng of the hippies with total abandon, it just deteriorates - there's still no suspense and even the killing methods aren't interesting at this point (he's just hacking away with the ax).

I give the film some points for attempting something a bit out of the ordinary at times, but its different parts never come together into anything more than a time wasting sequence of loosely tied together bits and popular culture tie-ins (Paul Reubens is somewhat wasted, but it was nice to see Fishbone again). 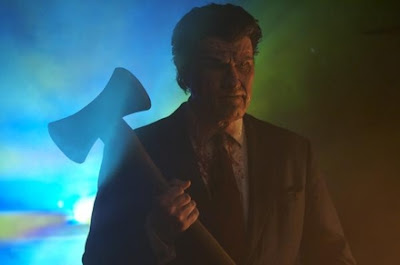 
A group of young people take their old, drug-filled, blue van deep into the woods for a weekend of nature and partying. 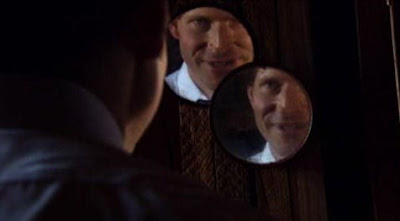 Sound like a familiar premise? It's not the only common link between these movies. "Simon Says" is also infected with a young cast of completely unlikeable friends who are given nothing interesting to say or do. I couldn't even see why any of these 5 main characters would even talk to any of the other 4. They are mean, petty, selfish and simply people I would go out of my way to avoid. Let's see, there was the jock, the stoner, the bitch and the slut. Even the obvious choice of The Final Girl (the extremely attractive Margo Harshman) is a pain in the rear. After this, "The Tripper" and "Automaton Transfusion", I've lost all hope in the young people of today...Apparently they all suck.

Fortunately, all is not completely lost - even though you're stuck with a cast you want to see terminated as quickly as possible, you've also got Crispin Glover. He plays a pair of deranged twin brothers (or is it just one?) and he doesn't just chew up the scenery - he devours it, spits it back out and then consumes its bloody entrails. And that's OK because he provides a number of amusing moments. He also seems to have booby trapped the entire woods with a variety of machines that just happen to be positioned ever so perfectly to intercept fleeing college age people. There are some inventive deaths (the "pick ax to the back in order to get dragged across the woods" is a new one), but they also get pretty silly - when you see hundreds of flying pick axes (CGI ones at that) get hurled via these home made contraptions your willingness to suspend belief wanes.

So the movie oscillates between some good and many not so good parts and proves to be an ultimately frustrating experience. It does end somewhat unexpectedly though. After a lengthy capture sequence of The Final Girl, we do get to see her show some intelligence and strength. And the very last scene provides the most disturbing moment of the whole film. 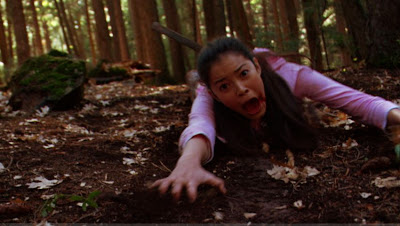 So in the end, although both of the films tried in spots to approach the genre from interesting directions, neither of them really succeeded very well. Each film did actually have its set of fans in the audience - bursts of applause and occasional hoots occurred during certain moments or kills. But for me, the real chills came when we crossed the Pacific Ocean for totally different takes on horror from Japan and Thailand. 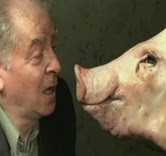 An old man sits across from a pig's head attached to a staff. He talks to it like they have a personal history and gradually begins to get angry. It unsettling, but you begin to wonder if it's just trying to be odd for odd's sake. And then you get to the ending and it comes together. Very nicely in fact. And then another little clip after the titles that puts the final stamp on it. 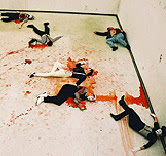 Ever wanted to take care of business when surrounded by mimes? Well the guy in this short certainly does - and it's pretty cathartic. But what if you didn't really mean for it to happen? Solid, fun short that gets bonus points for having little things going on in the background.
Posted by Bob Turnbull at 00:30