Toronto After Dark - "Audience Of One"


This post is also a par of the Film + Faith Blog-a-thon happening at Strange Culture.


Selecting a documentary to screen during a horror/fantasy genre film festival may be an unexpected move, but with "Audience Of One" (directed by Mike Jacobs) this year's programming staff could very well have found the scariest film of the fest. You won't jump out of your seat, but you will see a frightening display of the immense delusional capacity of human beings. 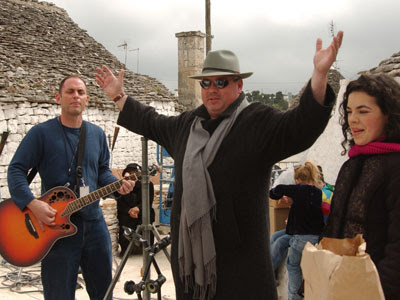 Pastor Richard Gazowsky has a friendly sympathetic face and immediately strikes you as an intelligent communicator. His congregation in San Francisco seem to be made up of past sinners, lost souls, neighbourhood families and perhaps a few lonely older people looking for a community. He doesn't seem to preach fire and brimstone or heal diseases at a touch of his hand. He appears genuine in his love of God.

So there must be a reason to turn a camera on him...And there is. Richard is a dreamer. A big dreamer. My friend Shannon said she loved that about the guy and I can't disagree. His dream is to direct a movie based on the biblical tale of Joseph but with a "Star Wars" feel to it. To be entitled "Gravity - The Story Of Joseph", he wants to bring it to the masses, eclipse production of any previous Hollywood film and to make every scene be something the audience has never come across before. That is what you call a capital 'B' Big Dreamer.

Now how can a man who had never even seen a movie until a scant 10 years earlier (when he was 40) direct the biggest blockbuster the world has ever known? The idea is preposterous from the get go and doomed to failure - and yet the audience can't help but root for him early on. You have to be impressed that he actually gets the project off the ground, finds initial investors and recruits members of his congregation to do various creative and crew roles. It's the flip side to the scary delusional part of the film - the determined collaboration toward a common goal. Perhaps we really can do anything we put our minds to if we have faith in the end goal or person leading the way.

But now that the word "faith" has been mentioned, it brings up a concern several people had expressed going into the film (and even afterwards). Is it all really just one big reality show episode that lets us laugh at Pastor Richard to make us feel better about ourselves? And to a larger extent a putdown of his beliefs and religious views? Granted, it would be a vastly different film if Richard were a plumber or a bus driver who wanted to make a multi-million dollar film, but I found that the filmmakers never made the core of the film about his religion. It's about a good man with an idea who not only deludes himself, but pulls along hundreds of others.

It really has more in common with the great documentary "American Movie" and the single-minded pursuit of that film's main protagonist. The desire stems from a different place, but for both of them The Big Dream seems almost within reach...

...until it begins to go south.

You get the whole range of movie set catastrophes (misbehaving cameras, unskilled labour, language barriers, etc.), but you also begin to wonder a bit about Richard. He has a huge expectation of sacrifice from everyone involved (their money, their time, their safety) as well as an expectation of faith in both him and God that equals his own. His mother sees him as naive and, with sadness and regret in her eyes and voice, wonders aloud why she turned over the control of the church to him. He begins to rationalize a great deal as well - particularly when it comes to the financing of the film. Though his German backers haven't come up with any money for him yet, he continually reassures his crew and others that the $200 million is ready for them. It's a lie, but so sure is he that God will provide for him, I think he has rationalized it to himself that the end justifies his means.

His delusions really start in earnest towards the end of the film. At one point, while the city of San Francisco is getting ready to sue his production company for failure to pay rent on their studio space, he and his team have gone off to a trade show and are making decisions to buy incredibly complex mixing boards and camera equipment. After the city manage to shut down the studio, Richard goes through a period of doubt, but re-establishes his faith - and then some. Presenting to his congregation the Eight Arrows Of Truth, he lists off 8 new goals for the church. Let's just say that his scope has expanded...It's a truly jaw dropping moment. Perhaps these bigger goals are there to detract from the failure of the initial smaller one, but it appears to be the same Richard as before - a big heart and what appears to be an honest calling to the Big Dream. 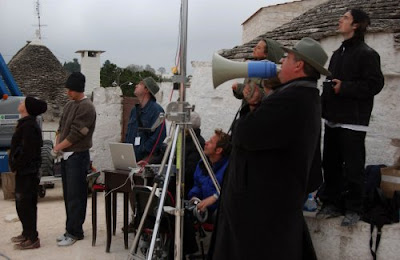 Email ThisBlogThis!Share to TwitterShare to FacebookShare to Pinterest
Labels: documentary, Toronto After Dark

Well, duh, I feel like an idiot. I found this amazing review of the film on the oddly named "Film Review Blog" and commented to compliment the author. Then I saw your comments, and found my way here!

Anyway, great great review. Now, what do we do about that thieving ad-revenue-generating blogtard?

Yeah, I came across our Film Review Blog buddy and asked him to cease and desist and remove all my posts. He assured me he was only "syndicating" RSS feeds, but he didn't have (and still doesn't) any attribution back to the owners. His answer to Final Girl was that we should add links back to ourselves in all our posts and that he would categorize the posts. Feh.

I realized that by default Blogger was providing entire posts as part of my default RSS feed, so once I changed that to show just a portion, he has dropped me from his feeds. The old posts are still there, but at least he's not pulling in any more.

I did a lookup of the domain and it's hosted by the same good folks I use (Dreamhost). I wonder if we sent them an email if they would take his site down? He'd probably just move it but I don't mind making it more inconvenient for him to make money off other people's work. What do you think?